After two other successful interviews, Sonichu fan Arthur Spatchcock makes a glorious return with his greatest interview yet of the TRUE and HONEST Christine Weston Chandler on 2 February 2016.

Arthur Spatchcock questions Chris about some information about his past that Arthur and his associates found here on the CWCki, such as the BlueSpike incident, death of Chris's pet cat Scamper, etc. Chris also performs his nightmare fuel Donald Duck impersonation, and states he once received a Tupperware full of HORSE manure. The two then discuss a bit of business and Sir Arthur Spatchcock suggest Chris do a demonstration of his incredible voice acting with his Sonichu Amiibo and himself. 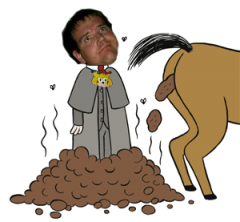 A theory on how Chris might have known it was horse shit in the container.

The audio is also available here.