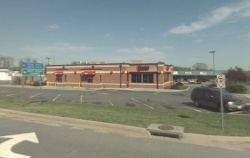 The branch of Wendy's at which Chris worked. 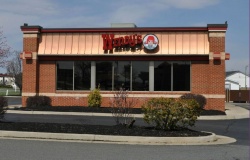 Another view of the store.

Wendy's is an American fast food chain that employed Chris briefly until he got fired. Chris's job primarily consisted of custodial duties instead of preparing food.

Chris has contradicted himself about exactly when he worked there. He claimed in his resumé that he worked at Wendy's from August to October 2001, but he told Kacey's father that he was fired shortly before 11 September after having been employed there for several months, implying that he started earlier than August.[1] Being let go apparently caused Chris sadness, as he expressed to Matthew. Chris likely worked at Wendy's for four to six weeks, working about 20-30 hours a week for what was probably minimum wage.

Chris said that his duties consisted of "Cleaning trays, tables and carpet/tile flooring, keeping the place neat and serving the customers with kind, understanding help".[2] However, accounts of his employment paint him as a particularly stubborn and difficult employee. In 2009, Chris was asked about his time at Wendy's several times after the date with Emily. Chris believed his supervisor didn't think very highly of him for reasons upon which we can only speculate. He mentioned a time involving him getting his uniform dirty and simply continuing to wear it after trying to wash it in the bathroom sink, not taking into account the usual sanitation standards of most fast food restaurants and also not realizing he could get another, clean shirt from the supply room.[3]

In a conversation with Kacey's father, Chris mentioned "emotional differences" as the reason for his termination, and claimed that the manager had a "spike on his shoulder" against him. It's not known what these differences were, although they were almost certainly minor differences of opinion over punctuality and performing the job duties for which he was hired.[4] According to Kacey's father, Kacey was at ground zero on September 11, 2001 as a civilian responder, giving "BLOOD, and plasma, [and] volunteering" at the site around the time Chris was fired. Devoria was less than impressed when Chris attempted to link the two events together.[5]

A chat with Jackie revealed more information about Chris's time at Wendy's. Chris talked about how a female co-worker was mean-spirited and gave him "bad times with criticisms, insults and whatnot". In reality, this could have been a co-worker simply trying to give Chris some constructive criticism. In the same chat, Chris also admitted that he would take frequent breaks after washing the tables and taking out the trash, not realizing that there was other stuff for him to do.[6]

The circumstances of Chris's firing are unclear, as Chris has given vague and contradictory answers about the cause of his dismissal. However, a number of incidents appear to have contributed to it. The last straw appears to have been when Chris scared a small boy in the restaurant. His family were about to leave, Chris helped them by giving them their bags and a top for their baked potato boat,[7] but then Chris performed his terrifying Donald Duck impersonation and the child cried. Chris claims that this did not scare the child – he was just tired.[8][9]

In a later account, he denied performing the voice when talking to Jackie,[10] even though he had admitted to it in previous accounts.[11][12]

According to an account from Catherine's cousin Al, Chris was actually fired for drawing an offensive picture depicting an older female co-worker as a Pokémon.[13] Given Chris's history of respecting his elders, this is not surprising.

At Wendy's, Chris received the only money he has ever actually earned in his life – a sum likely consisting of about $500, or nineteen days' worth of tugboat. And as of now, it's all he will make.