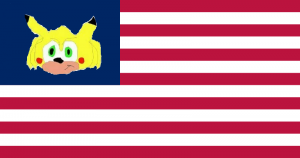 Chris's primary thoughts on the USA.

Chris's stance on the nation he lives in is inconsistent at best. While he claims to be a good citizen who loves and respects his country, his actions are often very obviously contrary to these claims. Despite this, Chris has never traveled abroad – he's rarely even left the East Coast. 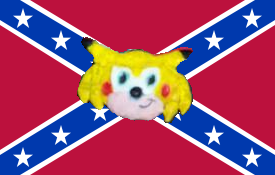 Chris's DEEPER thoughts on the USA (until becoming Transgender).

At a glance, Chris's initial sense of politics seemed very inconsistent; on some issues, he took a very conservative stance, on others a very liberal one. While many people have an independent or bipartisan opinion, one has to realize the true nature of Chris's decision-making: that Chris doesn't favor what's good for the working class, or any class, or America, or the world, but rather what's good for Chris. As such, he was against gay marriage because he hated da homos, and supported Barack Obama because he "saw himself in him".[2][3]

Another political insight is the vague statement "I agree with gun control.",[4] despite Chris's numerous death threats and vigilante plans that would require a firearm. Soon after, he clarified that he supported abortion,[5] undoubtedly to show his appreciation for women's rights.

Chris proclaims himself to be a "moderate".[6][7][8][9][10] While typically this simply means not having extreme or overly partisan political beliefs, he takes this as a general-purpose response to all questions about politics, including ones that have no defined middle path. Nowhere is this more apparent than in the Mailbags, where Chris will often dodge giving his opinion on issues every voter should have an opinion on, simply because he has no opinion, though he did vote for Barack Obama in 2008 and 2012.

Chris didn't react well in situations where he absolutely had to make a choice (Julie or PSN?[11]), and seemed to be easily persuaded on matters that he didn't really have a stake on. As a result, he often came across like a weathervane, just repeating whatever opinion that most recently lodged itself into his head. His frequency of vacillating his opinion about President Obama is a good example of this; he first parroted what his father had told him about it, then he changed his mind because of a documentary, and then he reverted his opinion because of his father again.

Chris's political stances became both more consistent and left-leaning as the 2010's continued. This is likely a blend of his worldview changing with his new adopted gender identity and also the passing of Bob, leaving him with no omnipresent conservative voice to sway him. By the time of the 2016 presidential elections, Chris had become a vocal Democrat. He does remain largely self-serving in his outlook however, he now ardently supports LGBTQ initiatives, though he at first still stuck to his dislike of gay men (rendering his support disingenuous at best) until 2015. His financial woes have also made politics related to welfare and state support a focus for him but he never forms thoughts on the subject beyond the vague belief that one party or the other is inherently good. Like many things with Chris, his outlook on politics is unbridled by civility or even common sense. In November 2016, Chris went so far as to openly call for the assassination of president-elect Donald Trump, something even the most die-hard liberal politico would consider madness to say aloud. 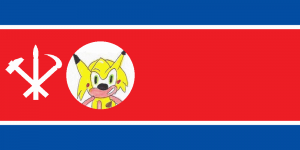 What Chris's ideas actually amount to in reality.

Chris's grasp of how the government works, much like Chris's grasp on reality as a whole, is very tenuous. One of the most telling examples of this is his ignorant stance on taxation and welfare. Because Chris is jobless, he pays no taxes. However, he still thinks of himself as a contributing member of society, because he pays sales taxes on the massive amount of crap he buys.

Chris also seems to have difficulty understanding what the true purpose of government actually is. The U.S. government's duty is to follow the will of the majority while respecting the rights of the minority, to protect its citizens from danger, and to ensure the continued prosperity of the nation. Chris, however, would like it to be totalitarianism and ideally to be the one running it, allowing him to enforce his deranged fantasies on the American populus:

The facts that this would neither help the country in any way nor be even remotely possible to put into practice are not ones Chris considers important. Chris's reasoning is simply that since he wants a sweetheart, everybody must want a sweetheart, and if everybody wants a sweetheart, the government needs to make it happen. Similarly, since he is uncomfortable with gays personally, every single gay person in the country must be forced into a heterosexual lifestyle.

Over the years, Chris has proposed a large number of laws, even sending letters to President Barack Obama demanding legislation against trolls and homos. This is completely futile for myriad reasons, but two are most pressing: one, the President of the United States has much more pressing concerns than making an insane manchild in Ruckersville, VA, happy, and two, the US President can't make laws. Separation of powers and checks and balances in government are concepts Chris has no time for — CWCville, after all, is a hereditary dictatorship.

Oddly, the closest analog for how Chris views his government is how Chris views his religion. He treats both the U.S. government and God as things that can be completely ignored unless he has a personal problem, at which point they should immediately act as instruments of his will. He believes that both have a deeply vested interest in himself, often at the expense of everybody else.

As established, Chris has a very naïve view of American politics and how the federal government operates. Despite these setbacks, Chris has developed a unique brand of patriotism he brings up quite often, usually either in defense of his character or dehumanization of his enemies. As a result, these stabs at jingoism often feel forced or out of place. Chris has utilized this tactic in Sonichu, with the iconic "Clarksville Address":

Chris bastardizing the American flag with his favorite shirt.

In the above statement, the central flaw in Chris's reasoning is displayed - the belief his problems are analogous with the problems of every American. Therefore, if ED satirizes him, they insult all U.S. citizens. This would become something of a recurring theme, with a later video claiming that any attack on Chris or his fictional "utopia" was equivalent to mocking any 'C-ville' in America.[15] On a shallower level, it's an obvious ploy for sympathy, a façade of reasonable nationalism that aims to make him the 'good guy', and by extension, Jason the 'bad guy'. Thus, patriotic symbolism is thrown in, without really even considering whether or not it makes sense in context. Chris is patriotic simply because he believes that's what will win him respect and reprieve.

His attempts to prove his patriotism are undermined, however, by his tendency to mock national tragedies and his complete inability to sing even the most well-known patriotic songs. If anything, Chris's attempts to prove himself a "true American" end up having the opposite effect.

However, his bumbling enthusiasm isn't reserved for the USA alone. Like many Americans, Chris has contrived of a highly dubious ancestry for himself, starting from Anne Boleyn, a Queen of England who was executed in 1536. This was almost instantly proven false when her ultimate descendant Queen Elizabeth I, also known as "The Virgin Queen", died in 1603, childless. Then Chris tried in vain to co-opt British, Scottish, and Irish national sentiment in his kilt-clad tirade against Surfshack Tito[16] as a means of intimidation. Also, while not a standard country per se, he also evoked his relation to the Cherokee nation in his infamous War Paint Video. Finally, Chris attempts to use the fact that February 24 is Mexico's Flag Day to justify turning his own birthday into a holiday; an American holiday. Note that all of these cases, Chris's total ignorance of other nations means he fails spectacularly at representing them and appearing patriotic. 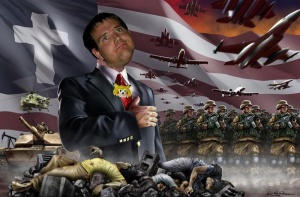 In an October 2010 video, Chris outlined what he would do if he were elected President. He declared he would cut taxes in half, build "soup hotels", give senior citizens increased funds for medications and special services, restrict guns to law enforcement personnel only, allow gay marriage, and form a special police force that focuses entirely on capturing Internet trolls.[17]

Aside from his failure to deliver a good speech, this video also showcases his complete and utter ignorance of how government and taxes work. Building luxury hotels for the homeless[18] and increasing social security for senior citizens would cost a gigantic amount of money to do, yet he also proposes cutting taxes in half (again thinking that all tax is federally mandated), thus also reducing the amount of money the government can spend in half. Given that Chris probably has no knowledge of economics, he likely assumes that money can be printed endlessly without fear of inflation.

Chris's restrictions of guns to professionals only is a blatant violation of the Second Amendment, which explains the right of American citizens to own a wide array of weaponry can never be infringed. While there are certain restrictions on who can own a gun and what types, generally differing on the state level, a flat-out ban on weapons would be found unconstitutional. Then again, Chris isn't exactly big on respecting the rights of others.

His departure from his previous stance on gay marriage is surprising, but then again, he was influenced by Jackie when he made the video. Despite his decree of equal rights, he does finish up his point by imploring gays to "keep it to yourselves in your room, just don't force it upon everybody." Meanwhile, Chris can flaunt his depravity in public to his heart's content.

While taxes, government spending, gay marriage and gun control are all big issues, Chris finishes up his video by proposing his most important change: the establishment of a special TrollBusters unit of law enforcement, apparently dedicated to finding trolls who make fun of people online, and incarcerating them. While a cybercrimes unit already exists for the FBI, they spend their time pursuing actual criminals like pedophiles and scam artists, not people who make fun of fat manbabies online.

Chris was also asked in Mailbag 55 to list the laws he would like to see put in place. As well as stating that he wants a ban on smoking, he also wishes for all men to wear a muscle bra and that all women who are currently in a relationship should be forced to wear a ring. Not only are such laws inane and draconian, but the latter two would also only help Chris's ego and nobody else.

Also, the fact that Chris is willing to suspend constitutional rights and spend countless theoretical millions to incarcerate people that make fun of him on the Internet is proof that Chris is neither a Republican nor Democrat, capitalist or socialist, right-wing or left-wing, authoritarian or libertarian, liberal or conservative, communist or fascist, elitist or egalitarian, individualist or collectivist, religious or secular, extremist or moderate - or really any political stripe at all. His politics truly begin and end with him alone.