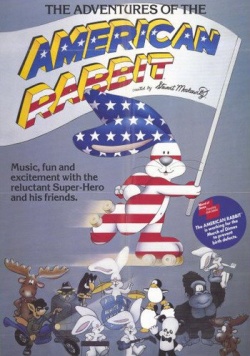 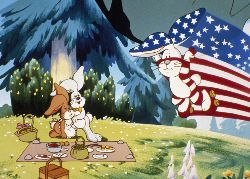 The Adventures of The American Rabbit is an insipid 1986 animated film directed by Fred Wolf about Robert Rabbit, a bunny who is transformed into a superhero to defend his friends, family and land from pollution and the Mafia, all while cavorting around in probably the most laughable "costume" in superhero history; his regular self painted in the stars and stripes, and wearing roller skates despite the fact he can fly.

Robert Rabbit is, next to Sonic the Hedgehog, one of Chris's biggest role models in life. In Chris's Wikipedia entry, he stated "they REALLY SHOULD HAVE MADE A TV SERIES of him." Along with Filmation's Ghostbusters, American Rabbit is another obscure cartoon likely culled from videotape bargain bins that had an inexplicably large impact on Chris's childhood. Why Chris latched onto a shitty cartoon movie from the 80s so hard is anybody's guess, though the colorful visuals, easy-to-understand plot, and anthropomorphic characters are probably a significant part of the reason.

Notionally, besides attempting to make money to rebuild a bar, the characters traveling with Rob believe that they have a "duty to fight against evil," but out of all of them (including Rob) only Ping Pong the gorilla actually does anything effective to thwart the antagonists. This is mirrored in Sonichu, where often the entire cast will struggle to defeat an enemy (or in the case of the women, stand around and watch) because Chris wants his flavor of the month to be the focus of the action.