From CWCki
(Redirected from Roche)
Jump to navigation Jump to search 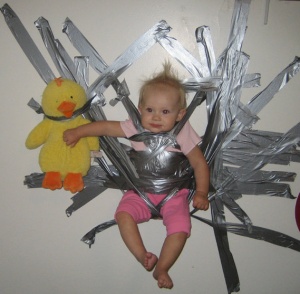 A re-enactment of what happened to Chris and his duck.

The abusive babysitter was a female babysitter in Chris's neighborhood with the surname Roach or Roche who watched Chris when he was 18 months old.[1] According to Cole, Roach was "unfit" as a babysitter, yet Borb left Chris alone with her every day for years anyway while they went out drinking.[2] She allegedly locked him in a room filled with toys while she babysat him because she was angry at him. According to Chris, he was so traumatized by this incident that he didn't talk for six years.[1]

Chris has blamed this event for his autism, although evidence suggests that it is a congenital disorder rather than something induced by emotional trauma. Generally speaking, the age at which Chris was allegedly abused is around the same time that symptoms of autism begin to manifest themselves anyway.[3] Once, in the Mailbag, Chris shied away from this explanation for his condition, referring to the popular (and long-debunked) myth that links autism to childhood vaccinations instead.

While sparring with Clyde Cash in Mumble 3, Chris said that he held no ill will towards his parents for leaving him with the babysitter: "They did not know better." This might explain why they would later become paranoid and belligerent towards others they believed to be antagonizing Chris over the following years.

The irony of it all is that, after all this, Chris spent much of his life willingly locking himself in a room filled with toys, and for days on end instead of merely hours. More ironic still is that the same is true for much of the Jail Saga, only Chris does not have his toys to accompany him.

How Chris even knows that this happened in the first place, given his very young age when this allegedly happened, is a mystery; it's possible that the babysitter had aired her frustrations with Chris to Bob and/or Barb and they eventually told Chris himself when he got old enough (assuming that, knowing Barb, it wasn't entirely made up in order to deflect from parental negligence, of course) and he believed it ever since.

The earliest reference to the abusive babysitter is in the Song of Christian videos from 1998. There, Chris explained the basics of the story and pegged her as the cause of his autism.