For Julie's Eyes Only 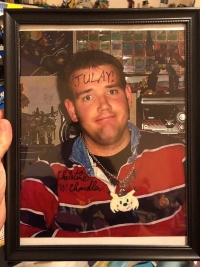 Chris wrote "that darned Meme Word" on an autograph and sold it for $75 on eBay.

On 20 February 2009, the first of (unfortunately) several sex tapes of Christian Weston Chandler were leaked to the Internet - provided, of course, that you count Chris humping a blow-up doll until he reaches a climax as a sex tape. The video file For Julies Eyes Only.MP4 consists of nearly eight minutes of Chris, completely nude except for his socks, making love to Kimmi, the blow-up doll, in a demonstration to how he'd get intimate with his then-sweetheart Julie. Throughout the video, Chris calls Julie's name out, eventually culminating in yelling "JULAAAY!" when he's close to blowing his load.

While the title suggests that the video was meant solely for Julie (or rather, the 13-year-old kid pretending to be a woman), the sex tape was soon uploaded to SlutLoad where it has received over 3.2 million views. It is perhaps the most-viewed video of Chris outside of YouTube, as indicated by the continued permutations of the "JULAAAY!" meme that even Chris is sick of hearing.

0:00-0:05 [Chris sits cross-legged on his bed, holding Kimmi up as though it were a naked girl standing before him, says "Hey, Julie," and glances at her.]

0:11-0:28 [He grips the doll, possibly trying to finger its asshole. He seems confused as to how to effectively copulate with this device.]

0:29-0:44 [Our hero abandons all pretense and bends the doll at an unnatural angle (with its upper body pointed straight up and its legs pointed straight out behind it), grapevining its legs with his own and pounding it diligently. Its asshole is spread wide in full view of the camera.]

0:49-1:25 [Quiet, uneventful thrusting. Chris seems to have a determined look on his face, as though he is focused on servicing his vinyl lover.]

1:26-1:32 [A loud snap can be heard, which seems to catch Chris's attention. He lifts the doll up and examines his crotch, then reaches over to pause the recording. In an email, he tells Julie that his condom had broke so he had to put on another one.']

1:53-2:06 [He shifts to a sort of scissor position, with Kimmi "straddling" his right thigh. Chris keeps one hand planted on its "breast".]

2:32-2:49 [Chris briefly tries to stick several fingers into Kimmi's ass before rolling over onto his side. His ass is now in full view as it thrusts and quivers against the love doll.]

4:31-4:40 [Filming resumes. Chris is seated cross-legged in the bed, much like the first scene. He proceeds to hump the doll.]

5:24-5:25 [Chris cuts the film and resumes the same scene, still humping the doll while seated.]

7:25-7:40 [Chris suffocates the doll with his weight by lying over her. He thrusts a couple of times and turns off the camera.] "Julie, thank you."

Postcards of the act were sent direct to Chris's father by an anonymous troll in early March. His family's reaction is unknown, except that his PSEye was briefly taken away.