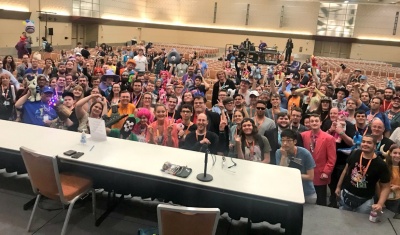 BronyCon 2018 was the penultimate iteration of the annual convention for fans of My Little Pony. The 2018 convention took place between 27 and 29 July 2018, once again at the Baltimore Convention Center.

Chris's visit to BronyCon was a remarkable contrast to the TooManyGames incident, one month prior. It is notable to mention that Chris received significant attention from his female fans, including one cosplayer, who attended several events with him.

Chris had a difficult time with the funding for the 2018 trip, due to being the victim of an alleged extortion scheme.[1] Chris eventually scrounged up enough money to afford the trip from eBay sales and donations.

The first of the donations came on 17 April 2018. Following a bout of Chris's begging over Twitter and in Look, I Am helping my mother and I with the monies, Jack Z gave Chris $1,200 in the hopes that Chris would attend BronyCon and hang out with Jack and be interviewed for his YouTube channel.[2] Chris then spent $250 on registration for a Bronze plan – confirmed by "Christine Weston Chandler Sonichu" appearing on the Sponsor section of BronyCon's website, as that is a perk of the Bronze plan.[3]

However, Chris was still in financial distress. On 10 May 2018, Chris had a meltdown over Twitter, in part due to people pointing out the issues with his finances:[4]

On 18 May, Chris requested free admission from BronyCon, on the grounds that "y'all know who I am" and that he was having extreme financial difficulties.[5] A fan pointed out that BronyCon offered a three-day pass for only $65, but Chris hesitated, saying he wanted a higher tier pass for getting autographs.[6] Note: The higher tier passes only grant priority in line.[3]

The next day, a fan suggested that Chris use BronyCon as an opportunity to make some money by selling at the Artist Alley, but Chris rejected the idea, saying he wants to "experience the whole BronyCon, and I cannot do that from Sitting in ONE spot in the marketplace".[7] Chris then tried asking BronyCon for a free upgrade from the Bronze pass he had paid for weeks ago to a Diamond pass valued at $2,000, again receiving no response.[8]

Strong ebay sales during the summer pulled him back from the brink of financial ruin in time for BronyCon.

Nine days before the convention, Chris had another obstacle to overcome, explaining in My Car is Heating Up Worse; PLEASE BUY from my eBay and HELP! that Son-Chu was in bad shape and needed $850 for repairs. Luckily for him, Danielle Stone hatched a scheme to become his sweetheart, which involved giving him $1,000 to get his attention. Chris simply friendzoned Stone and used the money for his car repair. As the repairs would not be done in time, Chris instead opted to borrow his mother's car instead, which she allowed after Chris promised to get new tires and a full oil change for it.[9]

Chris arrived in Baltimore on 26 July, the day before the con. He picked up his badge and ate dinner with Jai Heart – a fan. During the ride, Chris had a squeegee man wash his windshield, as captured in Chris Chan Boasting About Celebrity Status.

On the morning of the con, Chris posted a video to Twitter, where he announced his appearance, showed off his cosplay and explained his options for meetups and autographs.

Chris: [imitates OG] Wassup, my [unintelligble], my bronies and pegasister peeps! This is Christine Chandler coming to you live from Baltimare, Maryland and I gotten my ears and horn from last year. All I need is a pair of wings. I’ll get a pair in a little while. [unintelligible mumbling like a Japanese schoolgirl]. Ah, I’m gonna be around, around the BronyCon. And [holds up convention pass] like I said: [deep, smug voice] I sponsored it. I sponsored it! [deep, smug laugh]. [holds up his multitude of badges] And I got this, and for that. [unintelligible] ...this! [holds up autograph book] ...From last year! Hmm! [unintelligible] And... [holds up Green Card] it’s a green![11] So... Come say hi! Selfies, hugs... Little chat – free. Just, you know... Don’t harass me or anything. Be kind. Follow the rules! Okay? I’m certainly going to follow the rules. I learned my lesson from past experiences that I’m not going to go into liberty and talk about. But, where am I gonna be? Where I’m gonna be? I’ll be around. I’ll be around. [‘’places finger on lip’’] Shh. [childish voice] You don’t know where I’ll be. I’m not putting any details online but I have on this. [unintelligible]. I looked through the schedule. And I picked the events I liked. Just like I’m sure everyone of y’all did same. So, enjoy BronyCon, and... See you around.

Later that day, Chris attended a signing event, featuring voice actress Tabitha St. Germain.[12] As he waited in line, he uploaded a video. Once they met, they shared a photo together and had "lovely chat."[13] Whether Chris appealed for Tabitha to unblock him following last year's Twitter events remains unknown.

Chris: Hey, everybody. Christine Chandler coming to you live from BronyCon. And right now, I’m waiting in line to get Tabitha St. Germain’s autograph. So, nobody interrupt me there! And... my feet gave out, so I’m standing on my knees. Huh. I did get a few good selec–a few good pictures here and there of my fa–meet and greets of my fans. And also, I enjoyed uhh... ObabScribbler’s Analysing YouTube panel and [unintelligible] get to meet her. But, she knew–she recognized me and she gave me a hug off the bat. And–that was good. And I also met her fiancé, Reverb Brony. That was awesome [thumbs up]. [peace sign] So, anyway... That’s my story right now. Hmm. Check in again later!

At the convention, Chris posed for photos with fans. It is worth noting that Chris ensured his Night Star plushy from ChuuChuuRocket was always in the shot. Like 2017, users of /mlp/ once again posted their photos of Chris.[14]

According to a Twitter user who attended a same panel as Chris, Chris engaged with a voice actor, regarding "sister dimensions".[15] He also attended the Stepping Stones panel with voice actor, Ingrid Nilson.[16]

Chris was present at The Importance of Staying Creative – a panel hosted by TF2 Analyst, Mad Munchkin. Chris can be seen in the audience towards the front, by the left of the aisle:

In a vlog by DRWolf, Chris appears at the 3:06 mark (also from the Importance... panel):

Chris tweeted about enjoying panels and the convention so far:

Not long after the aforementioned tweet, Chris posted again: 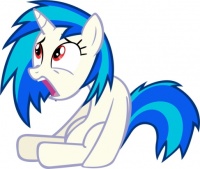 Chris attached this image to his rant.

Fans deduced that Chris was referring to Nowacking, who identifies as a transgender male, had a panel occurring at the time of Chris's post, and voices the character Chris attached as images.[17][18] In August 2017, Nowacking blocked Chris twice on Twitter due to Chris replying to every single tweet he made in a short space of time and the subsequent ween harassment; thus, he would have sufficient reason to turn down Chris.

Jai Heart, who dined with Chris on Friday, posted his account on the Farms:

Jai's post gave solid confirmation that Nowacking was the subject of Chris's upset tweets, and the pony featured in the drawing with Night Star matched Nowacking's OC.[20] Chris later confirmed that it was Nowacking who turned him down.

Chris had expressed hardships in affording to attend BronyCon 2018, yet he did not hesitate to purchase a sizeable Hasbro figurine for someone who likely receives fan gifts often. Chris' attempt at gifting a drawing to reconnect with a person who blocked him echoes the "apology piece" during the Doopie Saga — both attempts achieving similar outcomes.

Chris participated in the Riffing Rainbow panel, which allowed audience members to come up to the stage and read terrible fan fiction for a prize. If the contestant did not correctly pronounce a syllable (as per the script exactly) the contestant would lose. Chris first appears at 0:41 mark and is the second contestant at 5:25. Briefly taking the top spot, he roleplays as a host while other contestants take part.

Ultimately, the winner greatly outperformed Chris to win a Blu-ray of Paul Blart: Mall Cop. Worth it, right?

An alternative angle was also filmed: 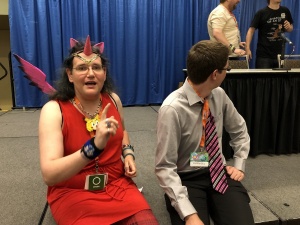 At the Riffing Rainbow panel.

RiffPonies member: Okay. So next up–I'm actually a big of you. I follow you on all [unintelligible].

RiffPonies member: Come on up. So. Let's see, where did we leave off? It was "commed."

Chris: I'll be sure to leave a comment on that commed.

5:42-5:48 Chris is directed to the script and is given the microphone.

Chris: Mmmkay. And just so everybody knows: I’m Christine Weston Chandler Sonichu. I am the creator Sonichu and Rosechu and the Nation of CWCville. So, let’s do this bad fan fiction.

5:53-6:03 The cameraman realizes he's recording someone unique, so he gets up and faces the main camera towards Chris.

Chris: And Spike commed over to her.

"What do you want Twilight?" Sp–Spike said.

And Twilight said, "I need you to get me the book of magic. Okay, Spike?"

And he went over to the bookshelf to get the book for Twilight Sparkle. It was a dusty book, and Spike almost sneezed, but he didn’t. He gave the book to Twilight and she said, "Thank you, Spike. Go away now."

Chris: Open the book to chapter–

[Audience groans as Chris looks on with sheer disappointment]

RiffPonies member: It is "pook."

Chris: Okay, you got me.

RiffPonies member: But that was a nice time! 47.6 seconds.

7:11 Chris at this point takes the top spot and sits next to one of the hosts.

Chris: [to the audience] All right! Number three, come on up!

Chris: [to the host] What's the time on that?

RiffPonies member: That was a minute, 18.49 seconds.

53:40 By this time, the panel is selecting one more person to take part.

1:00:46 Chris shuffles to the stage to congratulate the winner.

On the final day of the convention, Chris attended screenwriter M. A. Larson's panel with his new gal pal.[22] 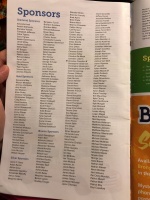 Chris' name in the booklet as a sponsor. Yes, he did graffiti the booklet to highlight his name.

After BronyCon, Chris became an avid follower of Mad Munchkin on Twitter – his obsession going as far as devising a genderswap counterpart to Munchkin's OC named Gary Stu.[23] In January 2019, following a combination of Chris' usual online behavior and excessive ween activity, Munchkin, among several other Brony analysts, blocked Chris on Twitter, paving the way for the Twitter block saga.

Chris also started following DRWolf, whose aforementioned convention vlog featured Chris in the Munchkin audience. Chris adapted Wolf's fursona into a Sonichu short, as well as an unexpected Lego parody. Both media dealt with the mass Twitter block of January 2019.

Chris would be seen the next year at the final BronyCon 2019.