My Car is Heating Up Worse; PLEASE BUY from my eBay and HELP 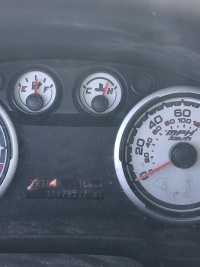 A photo Chris posted of the car's dashboard, indicating the car is overheating

My Car is Heating Up Worse; PLEASE BUY from my eBay and HELP! is a YouTube video Chris uploaded on 18 July 2018. In the video, Chris, sporting a Sailor Moon tiara, begs for people to buy items from his eBay listings to pay for repairs to his overheating car.

As possibly the thousandth example of how Chris is bad with money, he had spent over $200 buying Sega Genesis and Commodore 64 consoles less than two weeks before,[1][2] money which could have gone to an emergency fund for situations such as this.

The mechanical issue threatening Chris's mode of transport comes just 9 days before BronyCon - a 137-mile (220 km) trip. It's apparent then that Chris has already recovered from his TooManyGames fiasco and is eager to attend more conventions. Notably, the Chandlers possess another car, Barb's Dodge Caravan, so Chris could ask his mother to borrow it for the weekend instead of risking the trip in Son-Chu.

Throughout the video, Chris's voice constantly fluctuates from his normal monotone to an incredibly ear-piercing shriek. When he's not stretching his voice to almost unlistenable levels, Chris also slurs his words and has heavy bags under his eyes, which makes one wonder if Chris was sober while filming this video; let alone driving around.

Shortly after the video was made, Chris dropped the car off to a mechanic as an emergency case and will have to raise money to afford the bill when it comes due.[3]

Hello ev'body, it's Christine Chandler coming to you live from my (voice cracks) CAAAAR right noooow, I'm stumped right now, but, [dramatic glasses removal] my car has been acting UP lately, it's been going towards the (freakish falsetto)

And it's, pleat, there's...things growin' on the...antifreeze coolant thing, I, no-I think there's a, there's like a couple of leaks there, I JUST HAD THIS CAR worked on on that, but they couldn't patch all the leaks but now it's getting worse, I pulled this car out, I just put coolant, in the reservoir, yesterday, and...I pull the car out, I get out...I make my way up to CVS in Ruckersville, but then...it goes all the way, it starts GOING ALL THE WAY UP TO THE H IMMEDIATELY! AND I HAD THE AIR CONDITIONER GOIN' SO I HAD TO TURN THE AIR CONDITIONER OFF AND PUT THE...HEAT GOIN' ON, YOU KNOW THAT'S NOT GOOD, SO YEAH. PLEASE do me the BIIIIIIIIIG favor, buy my BIIIG price items so I can GET this car totally patched up, so I can get to BronyCon and all that. [stress sigh] A'ight, SO YEAH, I've reuploaded the two variants, I got the Love Quest saga autograph photo, sweetheart search, yeah...(coughs) There's also the autographed card variant where I reference the Pickle Man and Pedobear, and also there's the...TooManyGames autograph poster, but ALL THOSE autographs on it from this year, including mine right now, and...let's see, there's also the Johnny Cash photo. Ah, yeah. Big price items. PLEEEEASE PLEASE buy those now so I can (bangs fist on the dashboard for extra emphasis) get. This. Car. Worked. On. Right. Now. To

Subsequently, he raised the price on his autograph cards to $25 each.