A Public Announcement for Congress

A Public Announcement for Congress is a video Chris uploaded on 18 October 2010. The "for Congress" part apparently represents some confusion or misconception, because the video actually consists of a stump speech directed at the American people, outlining the policies Chris would advance if he were President.

Chris offers a number of initiatives that would give free money to senior citizens and the homeless, while also proposing that taxes be slashed to half of their current rates. In addition, he suggests that all guns should go to the police, and the citizenry could only be armed in case of an attack by another nation or another planet.

Though he's billed himself before as a "moderate," most of his prescriptions come from the extremes of the political spectrum: a massive welfare state (extreme left), massive tax cuts (extreme right), restriction on free speech and confiscation of all firearms (extreme in any case, not to mention a violation of both the First and Second Amendments). His stance on gay rights is reasonably moderate, however. Gay people would be accepted in his Utopian society, so long as he didn't have to notice that they exist.

In yet another display of Chris's patriotism, he calls the United States the United Nations, and refers to it as a city. Whether this is him wanting to expand his control to other nations or a legitimate mistake is unknown.

It's also worth noting that under Article 2, Section 1, Clause 5 of the United States Constitution, Chris was ineligible to run for President at the time he made the video, because he was not old enough.[1]

Chris also refers to the Internet as a wireless entity, believing that his tiny WiFi access point has the power to beam his videos across the entire planet. 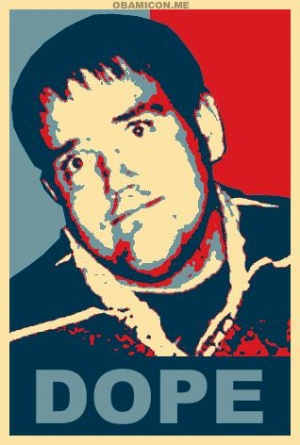 Good evening, friends. As your presidential candidate, I will now state how I feel [Chris makes an odd kicking motion.], what we can do to improve this, these nations, these states. For one thing, we got so many poor people out on the streets. I mean, we have soup kitchens and we have soup beds. We should really combine the two into SOUP HOTELS! So that there would be a bed for every homeless person until they can get back up on their own feet. Also, lower taxes. I will propose lower taxes, and we shall not have to pay so much. Five percent is okay, but why not two point five percent? And we will not cut off any benefits for the old people. They are good. And we shall give them plenty of money so they can afford the medications and services to keep them alive, because we do not pay for when we are sick, we pay for our good health! And we only pay after we're healthy. We're in good health. We pay to stay alive, we do not pay to die.

And, speaking of which, too much violence goes on within these city streets. I will propose only gun distribution to the official authority, which shall be the post-, which shall be within the police departments. Nowhere else. And all guns owned by locals, community people, shall be taken away. At least the bullets. When the bullets are necessary, or when there is an outbreak of violence from another nation or planet, then we shall issue the bullets. At all-, at free stations, to be opened immediately. Otherwise we'll send in our special troops. Our special force.

And also [another pause], we will be okay to have the gays [He noticeably grimaces.] within our community, we will be okay to have the gays within our community. In all states! There will be gay marriage ability for every state within the United Nations. I mean, keep it to yourselves in your room, just don't force it upon everybody, 'cause mup- the- mag- what may be right for you, may not be right for most. For some. You take the good from the bad and then you get an opening statement like mine.

People need to appreciate life, so we will not have to face death. I lost my train of thought there, but that's okay. I am only human! We are all human! I am a noble, honest person. No matter what e'erbody else may say, even on the Internet, and my opponent, Señor Cachez de Clyyyyde. He tells liiies about me! And so do the trolls that have be-trolled me over the Internet. Their jeers, and non-cheers, do not go appreciated. Because it is not everybody who can take a joke. Even when it's at their own expense.

And with that, I will propose Internet securities, reinforced by the FBI, and there will be patrol stations of the Trollbusters around these United States. Any repor-, any troll activity that you may be suspicious of an individual, you report to your local authority! And they will tell, and then they will inform the local FBI station within that state. And then they will investigate thoroughly! Over the wireless that is called the Internet! And they will trace the e-mails back to the origin home address or location. And they will be apprehended and fined or sentenced, depending on how CRUEL they are to the victim.

I stand strong, I stand firm, I AM A NOBLE LEADER! And if I am elected, I will do my best to keep our America strong and sound, and not go down the drain. I'm sorry, Obama, I did vote for you, but I gotta agree with my father, you are bringing us, somuss- some of the situations downhill. But I have nothing against you because I did vote for you. And I liked your documentary on A&E. I would shake your hand at the first opportunity I would to meet you, Mr. President.

And thou- er- fore, I shall conclude my opening statement. In the candisacy of the President, I say, I will do my best! And I am not lazy! Thank you.

This ad is not real. I'm not being, going to be elected President, but I tell the truth nonetheless of what I would do if I were to become President. Thank you.