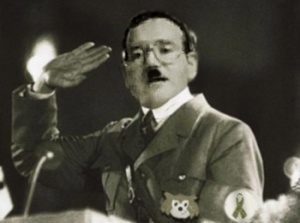 On 4 December 2009, Chris uploaded a screed about Asperger's syndrome to his CWCipedia. Similar to his irrational hatred for blue-colored arms, Chris's distaste for Asperger's is based not on reason but on his misconception that it is somehow competing with his precious crutch of autism. Chris has established an unwavering brand loyalty, and he'll be damned if he gives any ground to this diabolical "competitor." It would be shocking, if not for the fact that this is typical Christian Weston Chandler.

Chris has long suggested that somehow his form of autism is more special and worthy of pity than the forms of autism other people have. He'd never really given much of a reason as to why he felt this way, though he started getting pressed heavily on the subject in several letters he received through his mailbag. When trying to explain why autism is completely different than Asperger's syndrome, he would cite sources that actually went against his suppositions. When people pointed that out, he finally decided to vomit a hateful essay all over his site that suggested, among other things, that he "Helped cultivate the First Generation of Autistic People", and that he was one of the most successful autistic people of all time, that those afflicted with Asperger's syndrome are "impostors" that are hogging the "limelight" from autistics.

He also acts as if the fact that the name can sound like "ass-burgers" or "ass-boogers" ("Most Terrible Cut of Meat from any Animal; even something that can be picked nasally") is more proof that the classification of Asperger's as a type of autism is flawed (as if poor Hans's last name, which likely came from Asperge, a Central European word for "asparagus," were his fault). Chris misses the irony that ass meat is exactly what he eats every time he drives to McDonald's.

Long story short, he's merely crying that he thinks that people with Asperger's receive positive care and attention he feels he should be receiving instead.

Good day, I, Christian Weston Chandler, of sound mind and body, type the following from honest personal opinions, and I apologize for all offensive remarks I will be making in the statement.

Aspergers is Nothing At All Like Autism. I have stated this Fact over and over again in my replies to messages from people who tell me otherwise. I feel very sick and tired of hearing that false rumor that the two are Anything to Full Similar.

Firstly, I can verify that I was diagnosed with Autism with papers in my parents' filing cabinets. And more current and immediate within my reach, I have the papers from my most recent Psychiatric Evaluation on November 5, 2004 with Dr. Zachariah C. Dameron, III, M.D. She reverifies my Autisim in this, and I quote, "Mr. Chandler is a 22-year-old man with a history of developmental delays and autism. Despite these limitations, he semms to have been quite successful in maximizing his academic abilities. Despite his significant delays in language, he has over the years developed relatively affective communication skills."

And with that, I have not only Helped cultivate the First Generation of Autistic People, but I have gone beyond the Autistic Dreams academically, communicatively and socially. Still, I have trouble maintaining Eye-Contact, my mentality is sometimes slow yet quick at other times. The people who first evaluated me ever even stated that I would never even make it to High School, much less even Write His Name. Take That and Smoke It, oldest doctors. I have worked very hard to achieve and maintain Honor Roll throughout Middle and High School, and even to make the PVCC Dean's List, and fulfill my parents' wishes to work for and earn the Degree and Certificate for Computer Aided Drafting and Design.

And those with Aspergers DARE try to take the Shine and Limelight AWAY from us Autistic people, not only with their "Social Flaws" and such possibly similar traits to Autism. But to SHUN us Autistics by being BETTER Communicatively and Mentally than us. I have received a message from one who DARED called me "Normal" in comparison to him. IF ANYTHING, the Asperger people ARE and HAVE BEEN NORMAL. They think they can one-up, or even match, autism with the Lack of Social Capability and their Clumsiness and such. THOSE Characteristics can be FAKED by them who are MOST NORMAL compared to us TRUE AUTISTIC PEOPLE.

Even their Title is flawed, "Aspergers"; it can be misconstrued into a Most Terrible Cut of Meat from any Animal; even something that can be picked nasally.

I have fought Long and Hard to make a Stand for the Autistic People; I will most certainly NOT let these impostors Steal the True Original Title of Autistic from any of us.

VICTORY OVER AUTISM BELONGS ONLY TO US TRUE AUTISTIC PEOPLE.