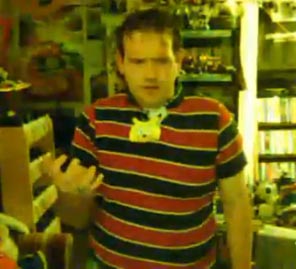 The Claw of Fail is a dramatic hand gesture used by Chris when he wants to emphasize whatever stupid point he's trying to make at the moment. Chris will hold his hand out, palm upturned, with his fingers outstretched and curled upwards, in the manner of a cartoonish villain.

Much in the way that Chris steals jokes, ideas and phrases he uses in everyday speech from movies, anime, video games and cartoons, he also copies body language and hand gestures. Although normal humans may reference movies and such when it is funny, appropriate or ironic, Chris relies on these to teach him new words, phrases and ideas. In short, Chris is like a feral child, raised by television, who copies the mannerisms of his adoptive parent. When Chris stopped talking as a small child, his parents put him in front of the television for two-thirds of the day, which is a habit he's kept up all the way to the present time. Remember, whenever Chris is playing video games, drawing comics or talking on the phone in his room, he often has a TV running in the background (sometimes muted and with closed captioning on, sometimes not).

The Claw of Fail is associated with, but not exclusive to, tard rage.

Christian has also shown TV pitchman BILLY MAYS clutching a miniature dogwood tree in a similar fashion, possibly as a display of dominance. In acting, this is usually called "milking the giant cow", and considered to be something only hams do. Chris can't even ham properly, though; the Claw looks stiff and unnatural, whereas a proper milking (see anything with Rudolf Klein-Rogge in it) is typically a very fluid and passionate gesture.

Chris has taken to using the Claw of Fail as a symbol of power or dominance over his enemies, as seen in his rap video. This is perhaps a sign of Chris's slow turn to the Dark Side as he indulges in the art of what he hates the most: trolling. Given the blackmail videos and the theft of Kacey, we can only assume it's a matter of time before Chris becomes a full-blown supervillain and wears the Black Sonichu medallion on a more regular basis.

On 5 October 2017 he streamed a video, bemoaning his breakup with his Internet girlfriend, Jessica Quinn. The video sees the return of the Claw of Fail as he curses the trolls he believed caused their breakup.

The Claw appeared again in June 2019's Pewdiepie Does Not Live Here; He Lives In Sweden!.