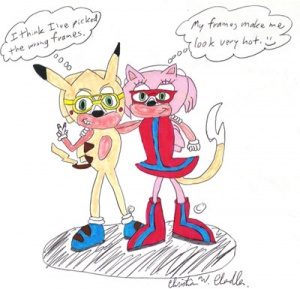 The Pedo-Glasses is the colloquial name for Chris's classic aviator spectacles, the appearance of which has been described as recalling some form of sexual deviant, such as a pedofork.

Chris claims in his diary that he began wearing glasses on 2 February 1998 because of nearsightedness.[1] He was diagnosed by his ophthalmologist half-brother David Alan Chandler.[2] Not long after, he had an altercation with a black kid on the school bus and his glasses were knocked off his face and possibly broken, depending on the version of the story.[3] Confusingly, Chris has stated that the bus incident occurred during his freshman year of high school (1996-97), suggesting that the date in his diary is probably wrong and that he really began wearing glasses in February 1997.

Chris thought the glasses looked good on him, calling them "Respectable Frames."[4] He also justified them with the argument that "they are the best fit for my lenses anyway."[5] Though some stronger prescriptions do require bigger frames to accommodate thicker lenses, standard prescription spectacles could be ground down to fit any glasses Chris desires.

Nevertheless, Chris has always been somewhat self-conscious about his glasses. He worried that his "needed-to-see-a-far-distance glasses" made it difficult for women to notice his "handsome face."[6] He does not wear them for dating profile photos.

While Chris's LittleBigPlanet avatar wears glasses, Comic Chris almost never does, though no one knows why. It could be that he finds drawing the glasses to be stressful, or that his self-image is stuck in early 1998. Perhaps Chris's idealized self has 20-20 vision? Sammy, a more accurate representation of the real Chris than Comic Chris, does wear glasses. They aren't pedo-glasses, though.

In a video diatribe against the trolls he defensively stammered:

In a couple of videos posted in October 2010, it appeared that Chris had wrapped tape over the bridge of his glasses. The tape was later replaced by a more permanent solution in the form of a nose-piece crafted with CRAYOLA FUCKIN' MODEL MAGIC.[7] How exactly his frames broke in the first place is unknown. The MovingForward Videos show that Chris sometimes stores his glasses in his back pocket, though, so it's not entirely unlikely that he simply forgot they were there and sat on them.