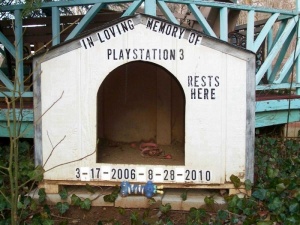 The MovingFoward videos are a compilation of three leaked videos (MovingFoward [sic], MovingFurtherFoward [sic], 100_2209.MOV) where Chris physically destroys his PS3. Having first followed good hard drive disposal practice, Chris says a few choice words before destroying the console with a brick, his car, and some scissors. Some photographs of the console in various states of destruction were also leaked.

Chris says that after smashing his console and driving over it with his car, he plugged it in again, apparently to prove that it would no longer function. He seems to have been unaware of the danger of fire or electric shock involved (or perhaps, in his despondent state, he simply didn't care).

Many trolls had come up with theories as to why Chris smashed his beloved Life Upgrade. Eventually, it was revealed in a communication between Chris and some high-profile trolls that Chris wanted to claim a very large monetary reward for its destruction. To no one's surprise, there was never any actual monetary prize for such an act especially because it was Chris himself who had done it.

Interesting to note here is that, like the snake he tried to run over, the cardboard box and the Clown Doll, it takes Chris three tries AND a coup de grace the next day just to break his PS3 dead.

[An opening title card appears, which reads "MovingForward." We fade to Chris, who is standing around outside and shakily filming himself with a handheld camera.]

I make this video... as a tribute... to what I have lost. But also from which I have lost, I have lost something that was of important value, but I am able to let go. It is the spirit of myself... of which was very lonely. But now move on, to a much brighter future. And now for the... feature presentation. On this video. What you are about to see is uncensored and unedited.

[He moves the camera to show his PS3, which has a case cover plastered in artwork of himself and Sonichu.]

My PlayStation 3, here in the backyard.

[He opens the access port to show the hard drive.]

The hard drive still in there. [pause] Formatted as it was. And for a memento... I'm keeping the cover.

[He removes the case cover, complete with the original Christian Weston Chandler's Adult Chronicles drawing, and puts it to one side. Then he focuses the camera on himself again.]

Again, it's very- this- this is very graphic, so if you are weak in the stomach, especially as a gamer, look away, and I mean no disrespect to Sony Computer Entertainment America. Maker of the fine product.

[Chris mumbles something unintelligible amid the noise of moving the camera. He then sets the camera down so it is focused on his PS3, which is sitting on top of a microwave that has been put on its side. He then puts on a pair of work gloves and picks up a piece of landscaping brick while an airliner flies overhead, somewhat drowning out the first half of Chris's next sentence.]

Vessel of my loneliness for the past three years of anguish. I bid you... fond... faredoo. Adieu. Fond fareweeeeell adieu.

[Chris uses the brick to bash his PS3 for the better part of a minute, never raising the brick over his head and only cracking the outer case. He pauses a few times to catch his breath. After a time, he moves back over to the camera.]

Crushed. Unplayable. The deed is done.

[Cut to a second title card, "MovingFurtherForward." It is nighttime - barely anything is visible. The camera is looking at Chris's driveway, in front of his (running) car. The headlights allow us to see Chris place the PS3 in front of the left front wheel of Son-Chu. He gets in the car, backs up, and pulls forward, running over the PS3. After a long pause, during which a loud thumping sound is heard and a dog starts to bark, he backs up over it and pulls forward over it again. Chris moves over to the camera again and points it at something, presumably the PS3.]

Well, you get the idea, anyway. It's useless! Broken!

[Cut to a third title card, "'100_2209.MOV' (A.K.A. 'REALLYMovingForward')." We are in Chris's bedroom. The camera shows us the wreckage of his PS3, very much the worse for wear. In addition to beating the hell out of it, he appears to have cracked the case and broken it down to its component parts, which he shows us by panning the camera around. Chris's speech appears to be slurred slightly.]

[sighs] Well, I run it over with a car and smashed it with a brick. Ugh. I thought I hit it on the metal part and the heavy plastic, but still, when I look at- still, when I plugged it in, it did not turn on. Actually, it went into standby mode, but that's all- as far as it went. That's all it went. So right now I'm gonna finish the job. Finish the job.

[Chris sets down the camera to show himself and the PS3 parts. He then picks up a pair of scissors, which he uses to stab repeatedly at bits of his former console. Partway through the stab-fest, he unfolds the scissors and goes at it two-fisted. Wearing out after about 45 seconds, he folds up his scissors and sifts through the debris.]

Look at that bend. Broke a whole buncha stuff on it. Now you tell me... it's still good! It ain't now!

[Chris stands up and the video cuts off.]

In addition to the poor quality video footage of the PS3's destruction, numerous photographs of the before and after have been leaked: