I Am The TRUE, Original CCWC 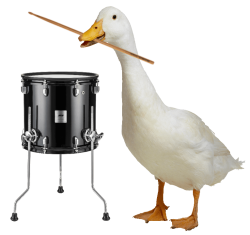 Artist's impression of Chris's Duck locating "SOME TOM-TOM TO POUND!!!!!" - whatever that meant. 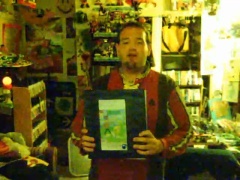 Chris shows off his Scrapbook of Fail.

The video opens with Chris standing in his room, wearing his red shirt with blue and gray stripes, Pedo-Glasses, Sonichu medallion and his Amnyfest Ring. Chris announces he is "here to dispel a big, fat thing". He then explains that the two videos of him singing along to "Ok2bgay" by Tomboy were the result of blackmail, and that he felt quite nauseous about the whole thing. Chris tells us he was (mis)informed that "Ok2bgay" was "a mockery", and so his performance was in a similar vein—in fact, it was comparable to comedy legends Monty Python.

From this, he somehow reasons that, since he was mocking being gay as stupid, his true message was it's okay to be stupid. He then feels obliged to assert his own heterosexuality by screaming "I AM STRAIGHT!", although the rhetorical question of whether Chris looks gay is met with hesitation before a shake of the head. Confusing the word "accusation" with another similar word, he also demands the cessation of "acquisition messages". We are also reminded that any dissing of Chris is also a diss of CWCville and Charlottesville. This is all achieved with multiple jump cuts, dramatic removal of and discarding of his glasses, wild gesticulation and YouTube video annotations. Speaking of which, this video is unique with regards to the sheer number of annotations Chris incorporates into it - Chris's videos usually don't have any annotations, even when he is raging. It is possible that the additional effort of writing annotations for videos causes Chris too much stress, leading him to more or less abandon them after attempting to use them in this video.

Chris then defends himself from accusations of being an impostor by going through the Scrapbook of Fail and displaying (allegedly) original art from the Sonichu comics while providing commentary.

Hi! [points and waves finger] Christian Weston Chandler here! And I am here to dispel a big, fat thing.

When I first read the lyrics I was being blackmailed into doing this.

I felt queasy [dramatically removes glasses] from the first time I looked at the very first line [dramatically discards glasses] of that damn, dirty song. But then, later, a friend made me realize—uh, a friend told me that it was originally done as a mockery! A mockery by the damn Tomboy. A mockery! So I went with that... and did my own spin-off of [arms outstretched] Monty Python's Flying Circus! [annotation: Really Stupid Flying Donkey] So therefore when I was saying it's okay to be gaaay I was saying it's okay to be STUPID! Stupid! That's one reason why I put that message in front of the video. [annotation: Webster's Dictionary: -Gay (Adj.) 1) STUPID!!![1]] Y'know, the word is stupid! The word is STUPID! 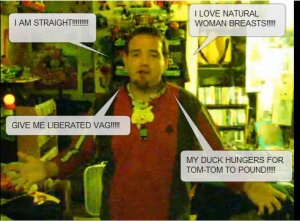 This is why YouTube made annotations: so Chris can communicate the need for "liberated vag".

The whole premise was stupid and that's what I went with. Stupid! I am straight! [annotations: I AM STRAIGHT!!!!!!!!!, I LOVE NATURAL WOMAN BREASTS!!!!!, GIVE ME LIBERATED VAG!!!!! and MY DUCK HUNGERS FOR TOM-TOM TO POUND!!!!!] Would I even be doing this if I—

And look at me. Do I look like... [shakes head in disagreement]—no more of those stupid acquisition messages!

Do not diss me any more! Or you will further diss-s-ss CWCville and the city of Charlottesville!

But anyway, also, to prove another point that I am indeed the real Christian Weston Chandler. And that I am not that damn fucking imposter in brown! I am going to show you a history [produces a black folder with the cover picture from Sonichu #0 on the cover, shakes his head like a smug, retarded tortoise, and raises the pitch of his voice considerably] of close-ups. A close-up history. Let's have a look in here, shall we?

[jump cut to a close up of the Sonichu #0 cover]

Ah yes, the infamous [totally misunderstanding the meaning of the prefix -in] classic hand-drawn cover of the Number 0 book. You can never, ever copy the hand-drawn styles. No matter how hard you try.

My art speaks for me. Now let's look at some more.

Here's a one page I'm sure you remember.

Mine and the first romantic attempt, [regurgitating something his mother must have told him] and I did an awesome fuckin' job.

And that corner tag came from an original "only for GameCube" title that was originally... a GameCube title but then later it expanded to other consoles. [pulls picture down and pokes his head in from right] Damn Xbox.

[jump cut to the cover of Sonichu #1]

[jump cut to an ad for some retarded Pokémon cards]

[laughing like a deranged lunatic at a joke not humorous to anyone but him] "Hahahahaha!"

[jump cut to a scene from another page from Sonichu #1]

What's the difference between Amy and Rosechu? Long tail. Rosechu has spikes. Amy has a red headband, Rosey has white. Her default outfit has stripes. Amy's does not. Blue and fire-engine red are their favorite colors. She prefers a different shade of red, Amy does. Now while they are going getting about, we'd like to save time and money with Get-co.

[jump cut to the Axe ad]

Only for the straight man. Axe. He use the Orizon—Orion scent.

"May I orbit your belt, sweetheart?"

[jump cut to two overlapping pages of Sonichu 3: the introductions of Bubbles and Angelica]

Here you are, two famous ladies.

[sings]I'm Nabeshin. My afro suits me; it's so easy to clean just wash it wash, Poemy was not the girl who ripped his tail, it was Mypoe you dang, old dorks.

[high-pitched, squeaky voice]Oh, look! I made it from Legos and Pixelblocks. And, believe it or not, I play "Thunderhorse"! Guitar Hero!

[jump cut to the cover of Sonichu 4]

I went. I fought. I eventually conquered with courage.

Heaven only knows what you might find. DARE. Dare to keep all your dreams alive!

[jump cut to a picture of Crystal from Sub-Episode 7]

The twin sister I wish I had in real-life.

[jump cut to another scene from Sub-Episode 7]

Where's Bumblebee when I need him?

[jump cut to a scene from Sub-Episode 8]

Special summoned guest star: Jack's Knight. Where is the queen and king? Matter of fact, was there an ace in the hole?

[gay voice] The hole of the queeeeen?

[jump cut to a scene where Chris-chan Sonichu plays Yu-Gi-Oh!]

[jump cut to the page opposite]

In the name of all hearts in the universe—

—we shall punish you!

[jump cut to a picture of Mary Lee Walsh]

Damn you, dirty witch. Damn you!

[jump cut to the first page of Episode 13: a group picture containing Chris-chan, Sonichu, Rosechu, and the Chaotic Combo]

Welcome to CWCville. Let's get this party started.

[jump cut to the following page]

Evil witch, I will avenge all hearts you have shattered (including myself), which you have done in October 2003.

[jump cut to another page with Megan and Megagi]

[jump cut to cover of Sonichu 6]

Patti, I miss you. Come home. We'll go play catch. And dear Kitty misses you, too... very much so. I love you.

[jump cut to image of Allison Amber from Sonichu 6]

Miss Allison Amber has been appointed vice-mayor upon her hiring. And she took the position of mayor during my absence within the alternate dimension. Billy Mays was never the mayor; he was my bodyguard and body-double. Shave off his beard, we look alike. Although, I constantly mistake him for Richard Karn. [sings] Home Improvement! Home Improvement! Starring Tim Allen. [Note: Home Improvement had an instrumental theme song, and even then it sounded nothing like Chris's howling]

Come on back, Billy Mays, and enjoy our dogwood festivals in Charlottesville!

[jump cut to image of Bionic from Sonichu 6]

Sonic had a twin brother? And he's a basketball all-star? [sings]

Only so many witnesses in Manchester high school have actually witnessed the creation and birth and Sonichu and Rosechu. Nobody else could ever had the experience those individuals have.

[jump cut to image of Megan and Chris from Sonichu 7]

Wow, he recovered quick... kind of a Goku get'em attitude. Too bad I was never just that too all into him. Megan... WHY?!

...And for that matter, Michael Snyder, WHY?! [annotation: Why did you Hate My Guts, Michael Snyder; I had my Voluenteer Job with the Pokemon TCG League. What are you, A CONFIRMED INTERNET TROLL?!!! You have my Number.]

[jump cut to image of Kellie Andes from Sonichu 7]

Kellie, I hope you are happy in your married life.

[jump cut to image of Joseph Herring from Sonichu 7]

Hey, Joe, whaddya know? Haven't heard from ya in a long time. How've you been? Hope you found yourself your female sweetheart. Too bad what's-her-name didn't fit the bill so well. She was a damn, dirty bitch. A picky one, too, whatever her name was.

[jump cut to Beavis and Butt-head ripoff from Sonichu 7]

[Beavis voice] Check it out, Butt-head. Somebody left their locker open.

[terrible Butt-head impression] Let's close it for them. BAAAM! Who wants to make love today? [high-pitched girl voice] Oh, we do! We do teacher! Alright. April, Lorry, Susan... Simoooooone....

I love you, Rosey. I love you, too, Sonee. Oh, by the way, you didn't think Sonichu and I were just living together the whole time? We got [annotation: March 17, 2006. HAPPY ANNIVERSARY!!!!!] married March 17th, 2006 at Angelica's church. We kept our marriage outside of the comic pages, as well as our children, which we have three of. Two Roseys and a Sonee. As to just not parently—permanen—prematurally miss the family-life during the early days of being online. We are staying offline for a while, bitches!

[sings] Everybody's trying to break my spirit, keeping me down... but the fire in my heart keeps growing! Growing!

Alright, spring break! Next summer, we get drunk. Woo!

We, the electric hedgehogs and everybody in the city of CWCville as a C-ville within the state of Virginia, stand firm and strong as proud citizens of these United States that everybody have fought so hard for the freedom of.

[jump cut to image of Rosechu from Sonichu 8]

WE HAVE VAGINAS, DUMBASSES!

[jump cut to image of Blake and Bubbles from Sonichu 8]

[jump cut to cover of Sonichu 9] Workin' on it! [annotation: Workin' On It]

And now for one final tidbit a spit of retribution against Howard the fiend [annotation: What The Hells Were You Thinkin' With That Damn, Dirty Pickle Suit, Brine-Headed Nerd?] from the cult of pickle-suited fiends. Divine retribution for that day you stole Emily, [gives the finger] you damn watchman.

[jump cut to picture of Mary Lee Walsh, Howard and a hedgehog]

[sings] What the hells were you thinking with that damn pickle suit?