William Darrell "Billy" Mays, Jr. (20 July 1958 – 28 June 2009) was an American television personality and direct-response television marketer, best known for his mannerisms in advertisements and his catchphrase "Hi, Billy Mays here with [X]" (X being the product being advertised, most famously OxiClean).

In March 2009, a troll assumed the persona of Mays and appeared in several IRC chats, and also frequented #sonichu and the PVCC troll forum, although he would disappear following the passing of his namesake in 2009. He would appear as a character in Sonichu #9. 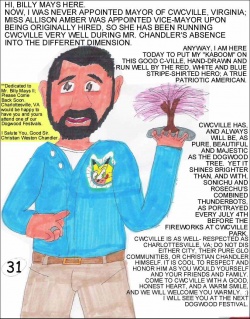 Chris desecrated the memory of BILLY MAYS by portraying him with Sonichu instead of the Oxi Clean logo on his shirt. Note how many fingers he has.

BILLY MAYS is considered a key member of The Miscreants in spite of being relevant to Christory for a fairly limited amount of time, and he made his first appearance when he moderated the infamous #Sonichu IRC Chat of January 20, 2009, which was attended by several trolls, including Clyde Cash. Throughout the chat, he expressed disbelief at Chris's reaction to the death of Ryan Cash, at Chris treating his house chores as an actual profession, at Chris's proclaimed heterosexuality in spite of possessing a dildo and crossdressing, Chris's use of the made-up word "diswrongfully", and Chris's failure to understand the nature of what qualifies as parody and what is protected by copyright. Most infamously, BILLY expressed disgust toward the revelation that Chris possessed lots of DIRTY, CRAPPED BRIEFS and was incontinent, before expressing total confoundment toward Chris for casually sharing that information with total strangers on the internet.

BILLY subsequently made a cameo at the end of the January 21 log, but arrived too late to actually be relevant to the conversation. Nonetheless, his surprise appearance and bit of semi-topical Random-access humor still amused Clyde for whatever reason.

Outside of actually attending these IRC chats, BILLY became a key component of BlueSpike's most infamous act of trolling. Max told Chris that he would need to step down as Mayor of CWCville and cede leadership to BILLY, effective immediately, if he wanted to get his PSN account back. Chris complied with these demands, along with taking other, more severe actions.

His first order of business was "ADULT PARTYING", and promised that everyone will go home smokey. He stated that "THE ROADS WILL POUR CHEAP BEER AND CARTONS OF CIGARETTES", noting that the poor citizens of CWCville deserve a week of "DRUNKEN STUPOR". During his short reign as mayor, BILLY MAYS instituted several groundbreaking reforms and was loved by all, with a record-breaking 99% approval rating. Sadly, CWCville's era of prosperity was quick to end after only a few months. 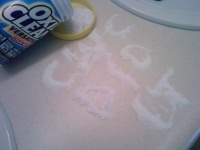 BILLY's message from beyond.

On 28 June 2009, BILLY MAYS was found dead in his mansion. In Captain's Log, Stardate July 1st, 2009, Chris claims he didn't kill BILLY, but rather that BILLY was a victim of a fatal heart attack, as officially reported by authorities.

In his Rollin' and Trollin' video, Chris laments the death of his "bodyguard" BILLY MAYS, and announces the near-completion of the BILLY MAYS Tower, and he noted that the construction in CWCville was meant to serve as a memorial to one of CWCville's most beloved mayors. That a skyscraper could have been constructed so quickly after BILLY MAYS's death is suspicious, and many CWCville residents believe Chris arranged the building of the Tower as a way to launder money stolen from his parents' credit cards, and that the naming of the Tower is nothing more than a publicity stunt to leech off of BILLY MAYS's popularity.

Many years later, Chris would later criticize BILLY MAYS's stint as mayor, claiming that "in the few short Months he was mayor of Cwcville; he was a major do-nothing and had nothing in his brain about politics."[1]

In Sonichu #9, BILLY MAYS fails to free Ivy[2] when she is strangled by elevator wires. The slickness of the walls keeps him from climbing up them to save her. However, the walls of text and general bad writing led to some confusion and the belief that he also died in the comic.

In Chris's Biography Page on the CWCipedia, he lists BILLY MAYS as a "non-cannon" character, despite his appearance in central episodes of Chris's comics.

For Truth and Honesty, see the archived CWCipedia page on BILLY MAYS