The TRUE and HONEST founding members of the Miscreants.

The Ancient and Secret Order of the Miscreants (aka "The Miscreants") was a secret society dedicated to keeping autistic man-children from getting laid. Because of a lucrative promotional deal with Nintendo, the Miscreants were briefly known as The Mewscreants in April 2009.

While online wars have been waged, more recently Men in Pickle Suits have been deployed to ruin Chris in reality. These exploits have included stealing his date, obtaining potentially life-ruining material, and generally being lulzy. Clyde Cash was the original leader of The Miscreants, but when he temporarily went missing, Vivian Gee became his successor via a rigged poll on their website. 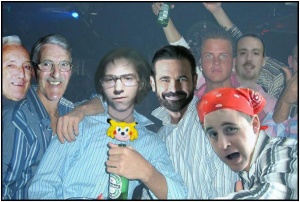 The Miscreants at their annual Ancient and Secret convention.

On 23 February 2009, The Miscreants approached Chris in Mumble and informed him of their plan. Several "HA-HA, I got you!" videos were made, all with false information. To deal with these Internet bullies Chris resorted to babbling incoherently.

After the disappearance of Clyde Cash, the site was down for a few weeks, with the message that "Clyde's dead, baby." After that, the website returned, apparently re-uploaded by Vivian Gee. Part of the site description read "Name's Vivian. Guess I'm the new leader or some shit. Fuck y'all."

On 28 June 2009, due to bad real estate investments and the financial crisis, the Miscreants declared bankruptcy and disbanded. 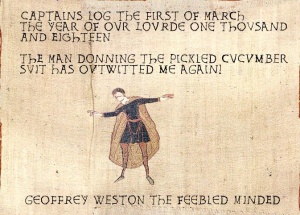 The Miscreants was an ancient order dating over a thousand years. In this lost scene from the Bayeux Tapestry, Christian's ancestor Geoffrey Weston the Feeble-Minded notes that he has been fooled by the "Man donning the Pickled Cucumber Suit."
Retrieved from "http://sonichu.com/w/index.php?title=The_Miscreants&oldid=218848"
Categories: