From CWCki
(Redirected from Lars)
Jump to navigation Jump to search

Jacklyn "Jackie" Romy is a boyfriend-free girl troll whom Chris met on The HooK Café. She became his sweetheart from April-October 2010, and Chris made her many videos. According to one of Chris' leaked Facebook statuses in February 2012, he had resumed contact with her, before blocking her that April after several private videos Chris made for her were leaked onto the Internet. However, in May, he re-friended her on Facebook. 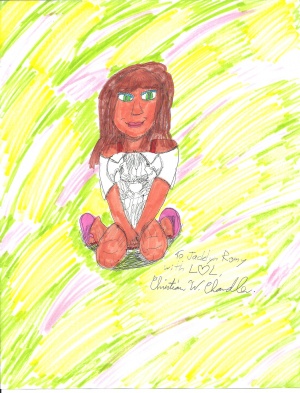 If you could have a dinner party and invite any 4 people, dead or alive, who'd be coming? Wilt Chamberlain, Queen Elizabeth I, Leonardo Da Vinci and Liberace. 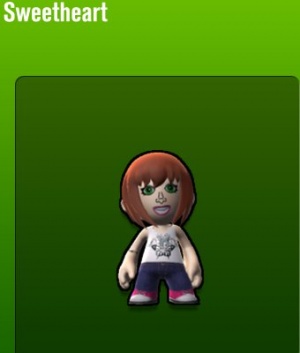 The relationship in full bloom

On 13 September 2010 Chris uploaded a video officially proclaiming his love to Jackie. Three days later, he produced a video capitalizing on Jackie's love for the Canadian band, Crash Test Dummies, while in blackface. Chris then spent October cosplaying as various characters from The Hamburglar to his own Chris-chan Sonichu thereby bringing the crazy to Ivy Saga levels (it must be the red hair). 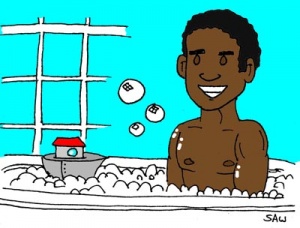 An artist's depiction of Lars.

Lars McNulty is Jackie's ex-boyfriend, whom Jackie left over his ridiculous obsession with model boats (which he eventually stopped buying upon realizing that it was an unhealthy addiction). He also made Jackie have an abortion against her will, and later distributed nudes of Jackie to a troll[4] and sent her a boat made of popsicle sticks, with a condom for a sail.[5] Egged on by Jackie, Chris developed an intense fixation on Lars and released a number of videos mocking and attacking his erstwhile rival.

On 6 November, audio was released of a call between Lars and Chris, who shockingly got along well with Lars after a while. Lars was portrayed by Alec Benson Leary mimicking an exaggerated Ebonics dialect, which Chris eventually started to emulate.[6]

On 30 October 2010, an inebriated-looking Chris posted a video in which he pleads Jackie to stay with him. Since there had been no further Jackie-related videos and Chris had decided to quit the Internet again, it was assumed they had split up. The actual breakup happened a couple of days later when he stopped responding to Jackie's emails.

On 12 November 2011, the album SPARKLE like you mean it: ROBEE'S BALLAD was leaked to the public; it was intriguing to many, because, while its main theme was Chris's Tomgirl lifestyle, adopted by him in early 2011, Jackie is also mentioned in various songs, and at the moment of its public release it was commonly thought that they weren't communicating with each other since November 2010. However, on 24 February 2012, TheCWCvilleLibrary released a number of videos from August 2011 that Chris made for Jackie. These included Cakefarts, Chris and Jackie's Date‎, Little Tomboy Blue‎, Who's Your Brony?, Forgot the Glitter‎, Teenage Dream and Cheerleader. While it was irrefutable proof that they were in contact back then, no correspondence between them was known to the public until 27 April 2013, when Chris's email from 5 August 2011 was posted on CWCki Forums, and 6 May 2013, when a whole set of emails was leaked there. Judging by them, Jackie resumed contact with him on 7 December 2010. The emails aren't later than 5 August 2011, however, leaked screencaps of his private Facebook posts from February 2012 reveal that he was still in some contact with her and hoping that they may get back together.

In the middle of April, Chris removed Jackie from his Friends on Facebook. The reason is unknown, though it has been speculated that it was the result of a flood of Tomgirl videos aimed at Jackie being leaked onto the Internet.

During May, however, Jackie got back on Chris' good side and was subsequently re-friended on the site, proving that Chris is terribly gullible when it comes to china. However, since then, she was never heard of again; this may be due to eventually finding out she was a troll.

Chris held onto Jackie's nudes several years after being trolled by her. In December 2017, he asked Idea Guy to analyze pictures of Jessica Quinn and Jackie to determine if they were legit or trolls, sending him lewds of the former and a nude of the latter. Idea Guy informed him that they were from the Hyperdimension Neptunia universe. Chris then regretted breaking up with Jackie, as this confirmed to him that she was real. 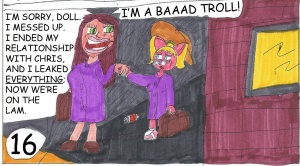 When Chris resumed Sonichu in 2017, he decided to include events that had happened during the years-long hiatus which began in 2009. Jackie and a character she created in 2011 named Vulva Pie[7] are featured in Sonichu #12. In the story, Vulva has a fling with Robbie Sonichu in summer 2011, which is cut short when Jackie, her mother, dumps Chris and leaks the content she got from him, compelling them both to go "on the lam".

The Man in the Pickle Suit explained Vulva's name: