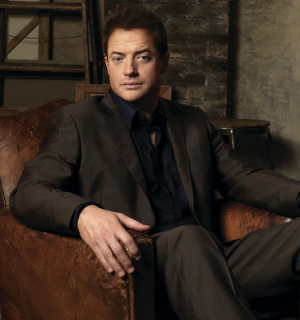 Brendan Fraser in his mayoral office, leading CWCville to a better future and slaying puss.

Brendan James Fraser (born 3 December 1968) is a beloved American film actor best known for his roles as Link in Encino Man, Captain Rick O'Connell in The Mummy or "the greatest movie of all time" as it's known to connoisseurs, Monty in With Honors and as DJ Drake in Looney Tunes: Back in Action. He is also the first democratically-elected Mayor of CWCville. Brendan proudly served the people of CWCville from his election in 2017 to 2021, when he was succeeded by Mary Lee Walsh. 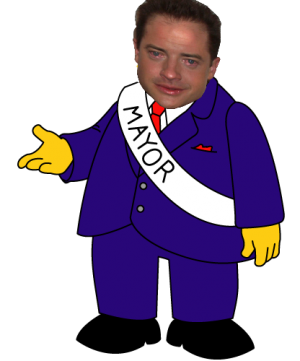 Chris stepped down as mayor of CWCville sometime during the events of Sonichu 11 and appointed Allison Amber as his successor. Later, the Idea Guys had Chris conduct a poll for readers on who they wanted the new mayor of CWCville to be.[1] They gave Chris a list of characters they'd like to see; Brendan's name was among them. Allison Amber ran for reelection against Fraser, Mao Zedong, Augusto Pinochet and Vladimir Putin. Fraser won in a landslide victory and Chris later acknowledged him as the new mayor of CWCville in December 2017.[2] Fraser's victory is most likely attributed to the dedicated and loving fanbase he has, both for his courage as a person and talent as an actor. It may also have something to do with the fact that all the other candidates were either dictators, murderers, or Chris's direct successor. Nevertheless, Brendan Fraser graciously and humbly accepted his new title.

Though Fraser becoming the new mayor of CWCville was highly well-received and seen as a new age for CWCville, some readers still accused Chris of writing CWCville as a police state. Chris objected to this, stating that Magi-Chan and Brendan Fraser would never run a police state[2], which most of the community conceded was a sound argument, considering how good of a person Fraser is in real life. Unfortunately, despite the popularity of Fraser, his early political tenor was almost as difficult and tragic as as his real-life acting career during the dark age. Issue 13 had Fraser preside over a city riddled with crime and violence caught up in an extremely violent and brutal war with Nazi Invaders. Fraser was the commander of CWCville's Military forces, but failed to drive the Nazis back. CWCville suffered heavy losses until order was restored by Chris and the CPUs.

Fraser was also responsible for the prosecution of Jamsta Sonichu for the sexual assault of Punchy, most likely as a result of his own sexual assault. Fraser had to lead the city out of chaos as invaders from neighboring countries attacked during massive riots, causing CWCville to have to fight a war on two different fronts. Brendan Fraser was one of the many survivors who formed the East CWCville Militia and fought back the Nazis until the city was restored by Chris' powers.[3]

Fraser's leadership was instrumental to CWCville and it's citizens during these trying times. Though these tragedies greatly hurt the enthusiasm and optimism Fraser's election brought, the eventual victory under his command made him stronger than ever. Fraser is easily one of the most popular mayors of CWCville of all time, thanks in no small part to his fantastic leadership in the city's most challenging time in history.

Years after the Idea Guys had been ousted, Chris confirmed in Discord Q&A 4 that Fraser was still in office, albeit with his mayoral role shared with the CPUs. He stated that Fraser primarily deals with "short office work" while executive decisions are made by the CPUs and likened Fraser as the "second vice-president" or "third heartbeat in line", none of which makes any sense for a mayoral role, which shows that, despite how uncomfortable he may be with the Idea Guys' lore, Chris still feels the need to keep it in canon.

In a 2021 Twitter post, Chris revealed that Brandon Fraser was no longer mayor, and had been succeeded by a reformed Mary Lee Walsh. It is unknown if Fraser was voted out or had stepped down to focus on his acting career. Nevertheless, his impact on CWCville was unforgettable, and he will be missed.