From CWCki
(Redirected from Bionic)
Jump to navigation Jump to search

For the short story, see Bionic the Hedgehog (short story). 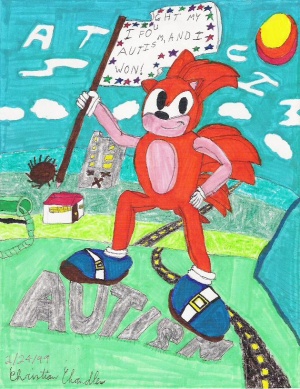 AstcI3 conquered! Remarkable! Now he just needs to conquer cross-eyedness and his colors flowing outside of the lines!

Despite his name, Bionic is not a cyborg. He made this clear after Alec's version of Bionic was depicted as an actual cyborg, styled after Davros. His name was instead chosen as "Bionic" rhymes with "Sonic" and the "B" is for "basketball"[2].

Chris claims to have created Bionic way back on 13 November 1996, when he was standing in the middle of the hallway of his high school next to the basketball courts, staring into the void like a retard. He claims that he was daydreaming about Sonic the Hedgehog character Mighty the Armadillo.[3]

Standing there motionless, daydreaming about Mighty, Chris was — you guessed it — hit in the face with a basketball. This, in Chris's words, "opened the lockers to his mind," and led to the creation of the recolor we know and tolerate today as the completely original character of Bionic the Hedgehog.

Bionic's backstory[4] tells us that he was Sonic's brother, and that when they were young, Bionic fell through a portal into a world filled with basketball players. Sonic, for his part, forgot all about his dimwitted sibling, and went on to be a real star. Cut to years later, when Bionic showed up to save his brother, and then go on to have other exciting adventures. It's interesting to note that, unlike all of Chris's other characters, Bionic was created within the SatAM/Archie Comic universe and not the video game universe.

As this was before Chris started churning out comics, Chris's very first creation Bionic was limited to only ever appearing in the occasional drawing or short story Chris thought up. Among other works, Bionic starred in the "Autism Conquered" drawing seen to the right, the rough sketch on the left, and a short self titled story.

Notably, Bionic used to look rather different from Sonic the Hedgehog, with smaller head-spines and much larger back-spines, and a tail. This different (but no less stupid) profile shape is likely not so much an act of originality as much as a simple inability to properly copy Sonic's design. Chris being Chris, Bionic's current iteration in Sonichu looks like the palette-swapped Sonic the Hedgehog he always was at heart.

Years after he was initially forgotten about and replaced by another equally stupid and unoriginal recolor, Bionic appeared in his successor's comic series at the end of Sonichu #6, where he arrives just in time to save his creator from being murdered by his homosexual evil twin after Chris got beaten up again. Chris eventually regains consciousness after being initially knocked out and Bionic gives him the fourth Sonichu Ball that Chris was fighting Reldnahc for.

In the following conversation, Chris and Bionic both make some very meta references to Bionic's creation and the last time Chris drew him, though Bionic for some reason does not seem to resent being almost completely forgotten about for years on end. The conversation ends with him asking Chris to provide him with a girlfriend, (you know, since he gave Sonichu one and everything), and Chris nonchalantly decides that he's now going out with Megan's character Megagi La Skunk.

Sonichu #7 followed up this thread by showing Bionic and Megagi leaving to go on their second date, and Chris, Sonichu and Magi-Chan then spent the rest of the issue traveling through time to retrieve a Sonichu Ball that had been lost in the past in Manchester High School. Chris worked his and Bionic's history into this story, recreating the above mentioned basketball incident in comic form, except with the Sonichu Ball filling the role of the basketball, which Chris then took and replaced with an actual basketball to keep the timeline consistent with his memories.

In Sonichu #8, Bionic appeared again with Megagi at the beach during the spring break special, during which time Megagi recounts a story of Bionic flirting with an anthropomorphic cat until she interfered and stopped them. Bionic says nothing and passively agrees with everything, showing that he has since lost his balls.

Bionic made a reappearance in Sonichu #9, describing getting into a fight at a basketball court with several comical attempts at "street" slang after he and Darkbind save Sonichu from the trio of Reldnahc, Giovanni and Robotnik, who had kidnapped his girlfriend Rosechu.

For some reason, Bionic didn't appear again until much later into Sonichu #10, where he made a brief cameo complaining about his depiction in Asperchu. He made a second cameo later in the issue, being one of the characters to execute Alec Benson Leary via ten-button electric chair, loudly proclaiming "I am not a robot!" as he did.

After being forgotten for seven years, Bionic appears in Sonichu #12 with his girlfriend Megagi La Skunk attending the Cwcville SLGBTQ Pride festival.