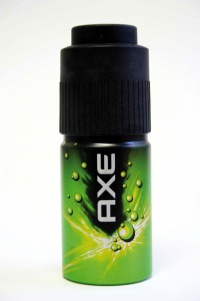 Axe (also known as Lynx to our British and Aussie Christorians; pronounced "Ats" by Chris) is a brand of body spray and deodorant that Chris douses himself in. The much-advertised "Axe Effect", whereby many boyfriend-free girls flock to the user of Axe, hasn't worked much for Chris, as he admits.[1]

His comics also seem to suggest that he's under the impression that using the body spray is a suitable substitute for bathing. He sprayed on some "Proximity" before his date with Emily, in lieu of showering.[2] Emily reported that he smelled like rotten watermelons that day. However, in his edited version of the ED Chris-chan page, he wrote that he employed "good clean practices of daily showers with soap, shampoo and water, and sometimes the natural body oders [sic]".

Axe and the Homos

In the beginning of May 2009, Chris was informed that Axe was very popular among men of a certain demographic. The alarming news that, instead of attracting "the ladies", wearing Axe may lead to getting rogered from behind in a dark alleyway lead Chris to record two videos demanding that Unilever state clearly on the packaging that Axe is for "straight people only", and that the homos heed his call of "Stay Off Our AXE, you Homos!" He also commented in I Am The TRUE, Original CCWC that Axe is "Only for the straight man.", and in the Mailbag wrote:

Chris' belief that a Forbes 500 company would take advice from a fat, balding manchild and be blatantly homophobic on the packaging of one of its most popular products speaks volumes on Chris' warped views on reality. 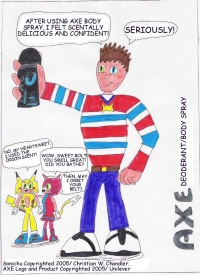 Chris shills for Axe in a full-page ad in Sonichu #2. Infamously, Rosechu asks Sonichu if he bathed, but Sonichu replies that he just used Orion body spray.

Also, one of the Samurai Pizza Bots is called Armoraxe, possibly in reference to the Axe Armor range.[3]

Chris switched to Secret Outlast, a brand marketed to women, during the Tomgirl saga[4].