This article is about the Sonichu comic characters. For the TSSSF card expansion pack, see Samurai Pizza Bots (TSSSF pack). 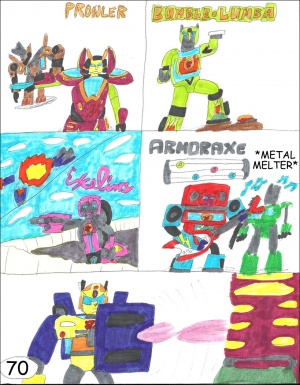 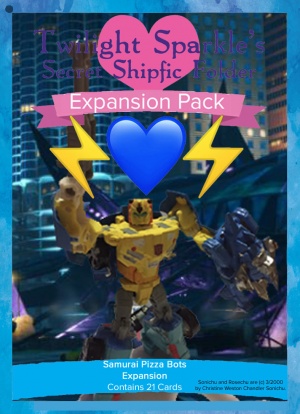 According to CWCipedia, the Samurai Pizza Bots are a cadre of Transformers who protect the city of CWCville from enemy attack. Since they didn't appear until Sonichu #9, one wonders where the hell they've been up until that point, and since Son-Chu at least has been around in the comic for a long time, why they haven't been helping Christian and Sonichu not get their heads kicked in by a variety of implausible super-villains in the comic before that.

If you're wondering about the name, there is actually a plausible reason for it (as opposed to the other strangeness in the comic like wooden badges being delicious). The name is actually stolen from an anime called Samurai Pizza Cats, about a gang of anthropomorphic cats who protect their city while running a pizzeria. Chris liked this concept so much, that he felt the need to steal it and incorporate it into his comics, by making the CWCville Autobots maintain disguises as pizza delivery vehicles, complete with the ability to holographically project drivers who would deliver the pizza personally to customers. 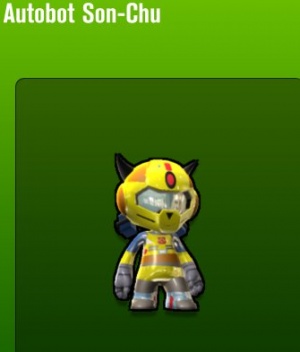 Son-Chu is Chris's own personal transformer. In typical Chris fashion, since the car is his, that means it is naturally the leader of the CWCville Autobots and has the most prominence in the comics, as well as being the only transformer to be spared the indignity of being referred to as a Samurai Pizza Bot. No, instead, Chris refers to his transformer as the leader of the "Virginia Autobot Squad".[1]

Also notable is that while Son-Chu still has the same stupid logo as the other Autobots, he doesn't actually have a day job delivering pizzas. Son-Chu is instead Chris's own personal transportation. In vehicle mode, he takes the form of the blue '94 Ford Escort that Chris drove in real life at the time. Like the other Autobots, he has the ability to project a hologram of a driver into his seat in vehicle mode to maintain disguise, and being that he is Chris's car rather than a pizza delivery vehicle, he creates a hologram of Chris instead of a hologram of a delivery boy.[2]

In fighting mode, he completely changes most of his entire design. While normally a Ford Escort, his body still changes into the front of a Dodge Viper in robot form anyway, and while dark blue before, while transformed he becomes yellow and battery blue. Notably, this is the same color scheme often associated with Sonichu himself, who is mostly yellow and has blue shoes. This could be the reason why the Autobot is named Son-Chu in the first place, but either way, it's probably not a coincidence that the two similarly named characters also have similar color schemes. As far as weapons go, Chris's description of him on CWCipedia says that his roof can become a shield, while his hood can become either a "Plasma Pistol" or an "Energon Sword". He is described as being "Quick footed, well armored" and with a "Strong personality under his hood".[3] Note that no such personality is shown in the comic.

For some reason, he can also transform into a concert stage, which he does in Sonichu #10 to help Christian and the Hedgehog Boys play a live performance of Revive Zordon,[4] with their music being so terrible that it actually causes 9/11. At this point, it is debatable whether or not Son-Chu is really a Decepticon agent in disguise, a theory leant credence by the fact that Megatron is clearly also in Chris's servitude.

Notably, Son-Chu appeared before any of the other robots in the comic, though not as a transformer. He made several cameos throughout the series in vehicle mode before he and the Samurai Pizza Bots' first proper appearance, being first seen at the end of Sonichu #0. 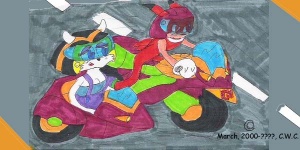 Punchy and Layla out on a drive. Also note the way Punchy rides the motorcycle like a man-pony at an S'n'M club.

For some reason, Chris decided to elaborate more on Prower than any of the other Autobots, giving him an established backstory on the CWCipedia article for Punchy Sonichu, his owner, in a short backstory subsection called Friends of the Fist. The story explains how Punchy and Prower first met, which basically boils down to Punchy noticing a motorcycle in a cave, talking to it, and it talking back. They then decide to be partners for some reason, and that's why Punchy suddenly has a samurai robot motorcycle working for him in Sonichu #9.[5]

Being the most fleshed out character of Chris's shitty transformers lineup however is countered by Prower also being the most obvious ripoff of the bunch. He is a blatant copy of the Autobot cyber-ninja Prowl from Transformers Animated, sharing such qualities as their samurai armor which becomes a sidecar, their similar names, their vehicle modes, and the fact that both are ninjas, both supposedly rely on stealth, both use holographic images and both use shurikens to fight.[6]

The source of Prower's name is a complete mystery. While it has an obvious basis in the name Prowl, his inspiration, why Chris chose to drop the 'L' is never made clear. The name is confirmed not to be a typo like Chrs-Chan Pure Pulse-Jolt Lance was for instance, because it is used multiple times in the comic and that is the name his CWCipedia article went by, meaning the alternate spelling of "Prowler" sometimes used is more likely to be the typo that "Prower" is. The strange spelling has been claimed by trolls over time to being everything from a racist joke about how Asians would pronounce "Prowler" to the more likely option of being a reference to Tails from the Sonic the Hedgehog series, whose real name is Miles Prower – a pun on miles per hour. To this day, nothing has been confirmed.

The token Bumblebee ripoff. Other than the fact he fights Jerkops and Decepti-Clones like all the other Samurai Pizza Bots and that he transforms into a yellow and green hatchback, ("Bug-Car" according to Chris), nobody knows anything about him. Not even Chris cares enough to elaborate on what kind of weapons he uses in Bumble-Lumba's own CWCipedia article. He just delivers pizzas, fights, and transforms.[7] 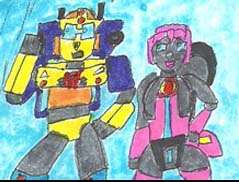 Seriously, what the hell?

The only female transformer and obvious ripoff of the movie version of Arcee. The inspiration behind Excelina's name is unknown, but most trolls point to either the anime Steel Angel Kurumi, which has a character with the same name and which Chris has seen before and liked,[8] or to Excel from Excel Saga, which Chris has parodied before.

Her vehicle mode is that of a motorcycle, (of what make and model Chris never says), and comes with a blatantly obvious female hologram "rider". Men are courteously informed that she is just a hologram, just in case you thought Chris's art had gotten even worse. This particular hologram also somehow has the ability to actually pick up pizza and carry it to customers despite not having a physical presence. Chris claims on her CWCipedia article that she knows all the shortcuts across CWCville, and that she can reach anywhere in the city in less than ten seconds,[9] a speed that neither Sonic nor Sonichu have matched so far.

She is described in combat as being "Slick, cool and full of style in her attacks" and "Strong-Fisted Up-Close". Her main weapon is said to be "Sniper-Style", but she "needs space" to use it.[10]

All this is irrelevant, however, as her lack of personality or any interesting design to distinguish her from the other Autobots means she will forever be remembered by trolls and Sonichu fans as the one Chris decided to draw with a robot vagina. 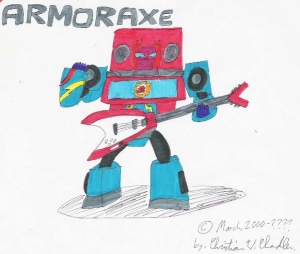 You know that little kid you see at your cousin's birthday celebration running around with a toy guitar? Imagine if he was a robot.

The apparent sub-leader of the group, acting in the same way to Son-Chu that Wild does to Magi-Chan, the Armoraxe robot is supposedly named for his tough armor and sharp axe. Unfortunately, Armoraxe does not use an axe, but instead a giant guitar that transforms into a plasma rifle. This motif with the guitar makes him a rather obvious ripoff of Soundwave from Transformers Animated. Chris describes him as a "real Guitar Hero", and claims that "when he Plays that Beat, HE WAILS!!!", whatever that means.[11]

His vehicle form is that of a minivan, perhaps more specifically a Scion xB, (though Chris described it as a "Heavy Beat Van"). In his robot form, he carries a boombox on his shoulders and wields a guitar. Due to Chris's lack of artistic talent, it is difficult to discern if his face is on the boombox itself or if he has a separate head that is in front of it.

In yet another example out of thousands that show how shitty Chris's comic is, is when Chris took down the 4-cent_garbage.com building in Sonichu #10 through the power of rock, Chris showed up in Son-Chu instead of Armoraxe, and Son-Chu turned into a mobile rock stage. He didn't bring along Armoraxe at all. Armoraxe's entire raison d'être is that he's a walking talking robotic sound system with a guitar, and the one fucking time he could have been at all useful, Chris chose to use his shitwagon instead.

Also note that Soundwave is actually a Decepticon, and yet his ripoff is an Autobot. If Soundwave were real, he'd feel insulted by this.

At this point, you're probably wondering where the hell these guys have been since the beginning of the comic, and that's a good question. At first, one would assume that the Autobots first showed up around about the time Chris got lost in the Time Void. They could have been called in as extra support after Chris got lost, or perhaps they coincidentally ended up there while pursuing Decepticons and decided to stay and help the city. Then, however, you realize that the leader of this particular group of Autobots is Son-Chu, who transforms into Chris's car, and Chris had that same crappy Ford Escort all the way back in Sonichu #0, which through retcons Chris has established took place years before Sonichu #9, and Son-Chu was never seen transforming in between those stories, even in situations where his assistance would have helped out immensely.

This then leads to the second theory. Maybe these aren't exactly the same kind of Autobots that appear in the regular Transformers universe. After all, the Decepti-Clones of PVCC were all actually built by Mary Lee Walsh and her minions, so maybe the top minds of CWCville got together and decided to just build some transforming robots of their own at about the same time, and perhaps Chris's car was stripped down and used for parts during the creation of Son-Chu, and that's why he was a robot in Sonichu #9 but not before that.

However, then there's the issue of Prower. He wasn't made in a lab or workshop to defend CWCville. He definitely came from out of town. Punchy found him alone in a cave behind a waterfall, and he claimed to have ended up there by coincidence coming back from a battle with Decepticons outside the city. So he must be the alien kind of transformer. This in turn though raises the question of why he was taking orders from a derivative robot like Son-Chu who was built by humans.

In conclusion, Chris introduced a new group of characters with conflicting origin stories and stupid retcons, and the end result was a mess so devoid of any coherence that no-one can even say for sure where the characters actually came from. In other words, typical Sonichu.