"FIX SONIC'S ARMS IMMEDIATELY, SEGA!!!" is a Facebook public group established by Chris to continue his noble struggle to pressure Sega into returning the color of Sonic the Hedgehog's arms to pristine flesh. He made the group almost immediately after being kicked out of his previous group on 29 November 2014 for making death threats. It was moderated primarily by Kenneth Engelhardt. Chris made extensive use of the page before his arrest. After his arrest, Chris logged back onto the page and discovered that while he was gone, the page had been overrun by weens, and he spent plenty of time removing all of the trollery on the page. He continued to post when needed into 2015. 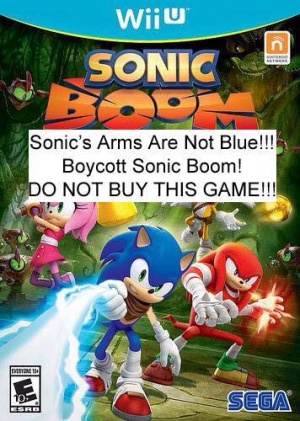 The gist of it.

Chris welcomed people to the group with a few demands and a link to a petition (which soon died).

Chris uploaded a number of the relevant posts and images from his personal page and "Keep Sonic Original."

The small print reads, "CONTACT SEGA AND FORCE THEM TO RECALL EVERYTHING SONIC BOOM, INCLUDING THE CARTOON SERIES ON CARTOON NETWORK, AND DEMAND THAT THEY CHANGE SONIC'S ARM COLOUR BACK TO THEIR ORIGINAL FLESH COLOUR IMMEDIATELY!!!"

Our long fingernails to their throats

Not everyone was convinced:

Chris confirmed that it was not a metaphor:

Someone else asked if there were any other changes to Sonic characters that Chris disliked. He responded:

Some (but not all) of Chris's fans were disturbed by this rhetoric:

But Chris was unapologetic:

Kenneth was not happy with the direction Chris was going, and wrote with remarkable prescience:

All Chris could say was:

Not a swift idea

On 4 December, Chris posted images of more of his vandalism examples. A fan asked:

Another call to arms

Have you done what I told you to do yet?

A fan pointed out:

Chris responded to news of a second season for the TV show:

Silent protests are not enough

Suggestions for getting arrested

On 6 December, Chris gave instructions regarding specific actions his legions should take. He stickied this missive to the top of the page on 13 December.

A troll made a skeptical comment (since deleted), to which Chris replied:

Reaching out to the Miiverse

Chris added one he forgot:

At this point Chris got arrested. While some group members assumed this meant he was gone forever, it turned out to be just a minor speedbump in his crusade.

On 29 December he shared his synopsis of the incident from his personal Facebook page.

It's all SEGA's fault

No one cares more than I do

On 10 January 2015, Chris posted a reply to his 29 December summary of his arrest, hinting that he was feeling isolated: 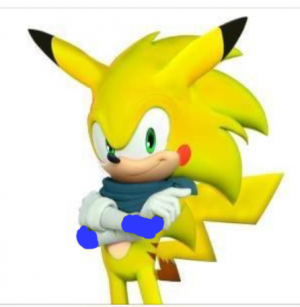 On 10 January 2015, a horrible troll posted the following offensive image:

Chris responds to a list of Nintendo products purportedly belonging to him and leaked to the CWCki Forums by an ostensible Nintendo of America employee on 12 January 2015.

Rather than address lowest-end estimates of several thousand dollars of tugboat money spent during the 4.5 years covered by the list, Chris focuses on two notable entries: Sonic Boom (Wii U, Physical) and Sonic Boom (3DS, digital).

Our boycott is working

Chris linked to an article stating that SEGA was downsizing and laying off 300 people, and posted:

In response to an article titled, "Head of Sonic Team Says Sonic Will Appear Again on Home Consoles," Chris wrote:

On 9 March, Chris discovered a snail-mail letter he had received over a month earlier:

He posted this letter to the group with the comment:

He proceeded to forward this letter to the personal Facebook timelines of Kenneth and Anna along with the command:

Chris soon deleted the letter. It is interesting to note that kesshite (決して) is the Japanese for "never", while buruamuzu resembles a Wasei-eigo rendering of "blue arms."

On 28 April, Chris posted without comment a link to an article on the "SEGA Nerds" site entitled, "Sonic Boom was originally called Sonic Synergy." The article noted that in the early concept art, Sonic's arms were still tan. 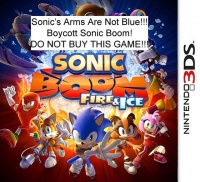 On 9 June, Chris learned that a new Sonic Boom game, Fire & Ice, was in the pipeline. Chris had the following response, which he also posted on his personal page and spammed to a number of Sonic sites:

He followed this up with a question:

Chris left this post on his personal page as well.

Apparently in response to the criticism that he was demanding the impossible, Chris countered:

Back to MS Paint

On 13 June 2015, Chris uploaded two photos featuring more reverse-alterations of Sonic's arms, choosing one of them for the group photo. 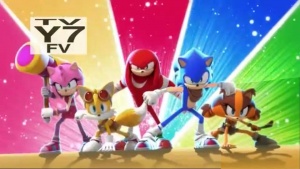 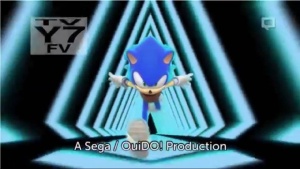 The End for Real?

Fellow protesters quickly informed Chris that this Amiibo was in fact a fake fan creation, but he didn't seem to care.

The following day he added: