This page covers Chris's activity on his personal Facebook page in June 2015. He was also forced by events during this month to return to his protest group, FIX SONIC'S ARMS IMMEDIATELY, SEGA!!! 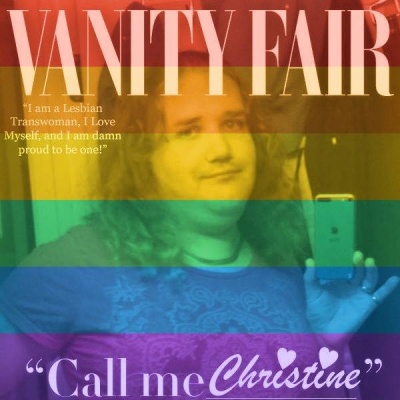 Chris linked to his Ebay page and wrote:

Since this batch of Amiibo was not selling as quickly as the previous two he reiterated the next day:

Chris Suffers for His Art

Chris harangues his valued customers about how the extremely minor skin injury on one of his fingers is causing him unbearable agony:

In the illustration, Punchy is saying:

Chris shared a link to a template which allows transgender people to insert their own photos on the cover of Vanity Fair magazine in the style of Caitlyn Jenner.

The "Cville Pride" page asked people to RSVP regarding an upcoming "LGBTQ Youth & Family Bowling Night," and state how many people would be attending. Chris responded:

Chris provided a link to a YouTube video announcement of a new title in the Sonic Boom franchise. His remarks:

Bring Me the Head of O(l)mar Woodley! 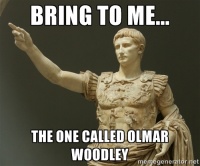 Chris linked to an article on the "SEGA Nerds" page, "SEGA producer discusses future of Sonic Boom franchise," and added a decree:

Three hours later he edited it to read:

Another Waste of Taxpayer Money

Chris spent a portion of 10 June copypasting his plea of the previous day that stores not sell Sonic Boom, along with links to his blarms protest group and his personal page. He left it as a reply to the reveal of the Sonic Boom: Fire & Ice box art on "My Nintendo News;" and to an article on "Tails' Channel." The public group "My Nintendo News" posted an article entitled, "Sega Says They're Taking Fan and Press Feedback And Building From It For Sonic Boom: Fire & Ice." Chris left the same reply here, along with:

Here he explained what he meant by the "other problems" he mentioned to Waterman in the above post.

No, Not That Catherine

"Legit Lady Gamers" asked the community what they thought of the game "Catherine." Chris offered:

Chris did not think that a joke made on the "SEGA Nerds" page was funny.

He also reposted his long defense of the behavior which had gotten him arrested.

For some reason, a radio station requested that people post "your full name without an E,F,R,S,K,I,M,L,C,A,Y,N." Chris amused himself by posting:

The Difference Between Justified and Unjustified Transformations

Chris Gives SEGA an Out

No and Shut Up

Another update on the new Sonic Boom game was posted on "SEGA Nerds," and Chris replied:

On the page "Derpy Hooves and Friends - Friendship is Muffins," someone posted a collage of facial expressions made by the ponies on the show. Chris asked:

He then gave The Boom Boom Room an official 5-star review.

Don't Get Too Dark

Chris wasted no time in offering advice to one of his new burlesque performer gal-pals, "Jane Ostentatious." On her page she posted:

Chris found a visual puzzle which asked, "What Number Do you see??" Chris answered:

Someone posted photos of androgynous actress Ruby Rose with the caption, "when u think ur straight but then ruby rose comes and confuses you." Chris agreed:

Chris read on "Lizzy the Lezzy" (one of his new favorite pages) about a lizard species that consists of only females. He joked:

Incidentally, Bonobos are neither monkeys nor lesbians (the species is almost uniformly bisexual.)

A Thought Out Thought

Chris replied to an article posted on "Lizzy the Lezzy" claiming the existence of a trend among women not to shave their armpits:

"Lizzy the Lezzy" also posted a humorous comment thread about sexualities which ended with the question, "When did this become a game of Chess?" Chris replied with some random-access humor:

Someone posted a series of 12 illustrations telling the story of someone who opens her heart, gets it crushed, and becomes emotionally devastated. Chris obviously noticed it because of its blatant heart symbolism. He commented:

"Legit Lady Gamers" announced a contest to win five gaming-related shot glasses. Contestants were required to enter a number between 1 and 85,000. Chris entered:

Note that he uses the word "fresh" three times. Because it's a synonym for "pristine," get it?

For some reason, the Impulse Gay Social Club has two Facebook pages, one for the "social club" and one for the bar. In October 2014, after visiting the club for the first time, he gave it a four-star review. On 24 June 2015, he gave the bar five stars.

A House is not a Vagina

Chris linked to a video called "Geraldine" and, naturally, attempted to make it about himself:

The book Chris read is The Handmade House by Geraldine Bedell.

On "Lizzy the Lezzy," a transgender man named Victor complained about how difficult it is to find a "soulmate" with "the wrong body." Chris agreed, and attempting to entice someone into donating a vagina:

"Legit Lady Gamers" posted an image of a pink Xbox One "for women." Chris predictably replied:

"Legit Lady Gamers" posted a game asking people to "match up the scenario for your birth month & character for your day." For his month, Chris got "Handcuffed (for life) to" and for the 24th, Frank West. He commented:

After apparently finding out, he added:

All emotions listed were nouns.

On 26 June 2015, the Supreme Court of the United States upheld the constitutionality of gay marriage. Chris's two cents:

Chris shared a clickbait photo claiming that "People with green or blue eyes are hyper and love to laugh. They tend to be quiet at first, but once you get to know them they never shut up. They're loyal and like long, committed relationships. They make amazing friends." Chris responded:

Along with millions of other Facebook users, Chris used an app to create a new profile picture.

Probably Because She's the One Who Looks Most Like Britney Spears

Except on Sonic's Arms

Chris took yet another dumb Facebook quiz to figure out "What Color Is Your Aura?" Chris got blue.

Another Failed Chance for Self-Promotion

To celebrate the momentous day, "Lizzy the Lezzy" requested rainbow-ized selfies and arranged them in a collage. She apologized, "Sorry if yours didn't make it - there were just so many i couldn't grab them all!" Chris whined:

"LGBT News" posted a joke. Ever the epitome of cluelessness, Chris responded:

What was that you were saying about self-control?

Viralwomen.com posted a comic asking the question, "What if We Treated Other Consent Situations Like Society Treats Sexual Consent?" The point is that people respond to sexual situations with a pushiness that would not be accepted in other aspects of life. Of course, Chris didn't get it at all: