The following are a series of posts by Chris on his personal Facebook page in November 2014. In this month Chris helped to create two new Facebook groups to promote his protest against Sonic Boom: Keep Sonic Original and FIX SONIC'S ARMS IMMEDIATELY, SEGA!!!. 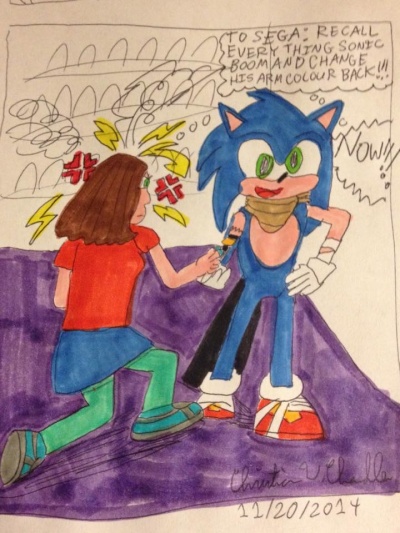 New profile pic for the month.

A fan had some questions:

He posted a follow-up the next day:

Caught Up on the Commissions

The "Sonic the Hedgehog" Facebook page asked, "What did you think of the first episode of Sonic Boom?" Chris posted on his own page:

One of Chris's followers called for reason:

But Chris would not be moved:

Kenneth, still trying to be helpful:

Chris shared a photo and commented:

Medallions Only Available on Timeline

This is Getting Repetitive

Chris posted a still from the Sonic Boom TV show with:

In Case You Didn't Get It the First Time

On 16 November 2014, Chris uploaded screenshots of the above conversation between himself and Kim regarding his holy cause.

Chris provided a link to iPetitions with:

Chris complained about being rejected for being a sperm donor because of his autism. Chris posted screencaps of his e-mail about the situation. In typical Chris fashion, the idea that there might be reasons other than autistic discrimination doesn't occur to him.

Changing Sonic's Arms Back for the Nth Time

Chris continued his complaining over Sonic's blue arms, this time by drawing a picture about himself, dressed in women's clothing, painting Sonic's arms. The illustration itself was actually a request from a CWCki Forums user for a comic,[1] before Chris posted the panel on his "Keep Sonic Original" Facebook group. 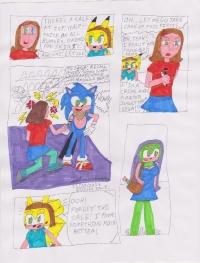 The requested full comic including the infamous panel.

Not Even a One-Hit Wonder

Chris reminded his readers about his mom's car:

Chris is Unable to Tell Temple Grandin About the Blarms

Temple Grandin was advertised as appearing at a conference in Roanoke, VA on 5 December.

Chris is Just a Clown Who's Feeling Down

On 29 November, Chris chose the above drawing of himself vandalizing property as his profile photo.

Chris completely missed the satirical slant of this video.