This page covers Chris's activity on his personal Facebook page in July 2015. He also made a contribution to his Brassieres For Males Facebook group page during this month. 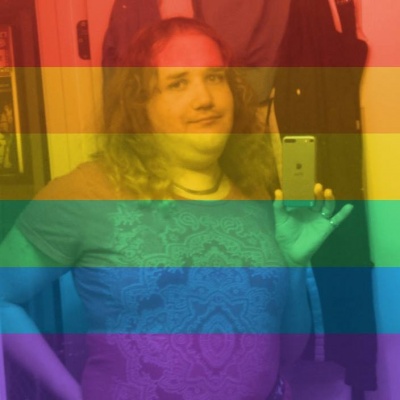 The Pink Lemonade Shall Rise Again

Haters to the Left

"Lizzy the Lezzy" posted a boilerplate anti-gay message for her followers to make fun of. Chris joined in:

Miley Cyrus uploaded a photo of herself wearing a t-shirt with the slogan, "GENDER IS OVER!" Chris gave a seemingly contradictory answer:

Chris linked to a GameStop contest called "SummerAtGameStop," along with this message. The specific games he mentions were stolen by Julie.

Chris shared a photo and added:

Chris found an old photo on the "Occupy Democrats" page and, typically, completely missed the point, in the process dishonoring his Cherokee ancestors:

Chris posted a screenshot from an episode of My Little Pony featuring pony versions of The Beatles and wrote:

Chris decides to announce to everyone that his breasts are a D-cup in size, when in reality they would be lucky to fill an A-cup brassiere. His delusion about filling a D-cup is probably because the entire brassiere was far too small for him.

Later in the day, Chris removed the last paragraph and replaced it with:

The text in the drawing reads as follows. It is not clear if the date is accurate, or if he just forgot about the new month.

At this point, for unknown reasons, Chris's Facebook page was temporarily set to private, leading to a brief moment of panic for his True and Loyal Fanbase, who feared it had been deleted. Within a day, thankfully, it was back up.

On 3 July, Chris uploaded a new profile photo, showing his full torso, probably to emphasize his moobs. He added:

Chris' extremely selective and patchy knowledge about Native Americans reared its head when "Lizzy the Lezzy" posed the question, "What if Disney characters were in same-sex relationships?" Chris added the comment:

The Definition of Trolling

Chris linked to an article about supermodel Chrissy Teigen and her unconventional effort to persuade Instagram to allow her to post topless photos of herself. He commented:

Chris left a comment on a post about the latest My Little Pony episode, regarding one of the characters:

In another MLP comment, Chris criticized his favorite voice actress:

Chris linked to his original eBay page and wrote:

More Instructions for the Haters

"Lizzy the Lezzy" posted another homophobic rant she had found. Chris suggested:

I Demand That You Hate My Nipples

"Lizzy the Lezzy" posted an article about a trend on social media sites in which women are pasting images of male nipples on topless photos of themselves, in order to challenge double standards about nudity. Chris's autism kicked into high gear:

This photo was in fact removed from Chris's personal page, but it's not clear how and why.

Swinging at a D-Cup Level

Chris struggled to clarify his argument on his own page, reposting the photo of his manboobs and evidence that he had reported his own photo to Facebook authorities:

He shared this post on his Brassieres For Males page. His personal page actually was temporarily deactivated, for the second time this month, and when it came back up, this post was gone.

Chris had a moral dilemma over the implications of making a Hitler medallion and reconciled with the idea by making a mess of his commissioner's order (intentionally, that is).

For the third time this month, Chris's Facebook page was briefly deactivated, and when it came back up, these pictures were gone.

Chris responded to the announcement on "My Nintendo News" that Satoru Iwata had passed away:

An Absence of Lesbians

Chris made one of his apparently routine appearances at Impulse Gay Social Club, but attendance was thin on this particular Saturday night.

There wasn't a lot of interest in the new eBay items.

On 23 July, as the clock ticked down, he edited the first sentence to read:

What the T Stands For

"Lizzy the Lezzy" reported on a gay pride festival in Scotland which was excluding drag queens to protect the sensitivities of transgender people. Chris was not pleased:

Chris shared a video to illustrate a point about the blarms:

Chris's Hair is Not Blue!

Chris reveals his hair is now a sickly blue-green colour, having presumably dyed it himself (possibly without even bleaching it, based on the murky and unappealing colour).

The Supremacy of Sonichu