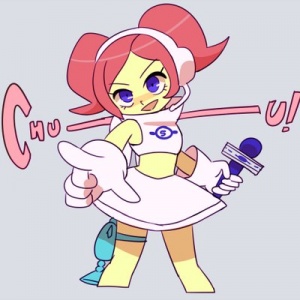 Profile picture, based on Ulala from the Space Channel 5 series.

Creamarina is a Twitter account created by MKRNightVee, who shared it with Chris to enable him to evade blocks people set on his other accounts.[1] The account originated during the TF2 Analysis saga, when many bronies blocked him on his main Twitter account. The profile picture features MKRNightVee's artwork.

The account came to the attention of an observer on 28 January 2019 who noticed that, of the 60 accounts it was following, 50 were known to either be actively followed by Chris or confirmed to be have blocked him on his main account.[2] At the time, the account had no tweets.

However, months later, Chris seems to have felt it was safe enough to tweet. Only a few tweets were made, which match his writing style.

Chris (during his phase of being possessed by Magi-Chan):

Chris quoted a tweet from his main CPU_CWCSonichu account about his Dungeons and Dragons character sheet, and tweeted:

What animal is Josh Scorcher?