Chris has changed his mind about Equestria Girls

Don't call me a wet blanket.

This may have been a response to a CWCki Forums ((now Kiwi Farms post of 15 July, where "Da Pickle Monsta" wrote, "most women don't want boyfriends with the emotional maturity of a wet blanket."[1] 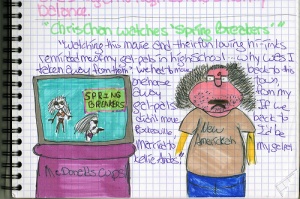 Chris posted a screenshot from the CWCki Forums.

I'm sending you love, too

What she didn't realize is that the "hand shape" on his profile pix (actually the cover) is actually the picture of Sonichu's head which Chris puts on everything.