Shrek Retold is a crowdfunded shot-for-shot remake of the 2001 film Shrek, released on 29 November 2018. It was organized by 3GI Productions for their annual Shrekfest convention. 200 people contributed their own versions of scenes from the movie. Chris was assigned scene #23 out of 200, in which Shrek is convinced by Lord Farquaad to go on a quest to rescue Princess Fiona so he can have his swamp back.

Chris's scene features voice acting and crudely colored stills that were surprisingly animated - though very likely by someone else - probably doing the most work he's done in around a year and a half. His scene is still only a little over a minute long. The audio on his scene also continually skips numerous times, as if it were filmed with his abused PSEye.

Shrek Retold was a rare instance where Chris asked to be part of something, Chris did it and completed the task on time, and no drama was started as a result of harassment by weens or Chris himself. As of July 2022, Shrek Retold has amassed almost 9 million views, making it the most-viewed video in Christory by default.

Chris: This is Christine Chandler, I'll be depicting scene 23.

As Shrek enters the ring, the crowd cheers.

Chris: The bad guy— I forget his name— communicates to the armed forces and Shrek becomes a bit offended and Donkey is scared...?

Knight: "Shall I give the orders, sir?"

Farquaad: "No, I have a better idea. People of Duloc, I give you our champion!"

Chris: ...says that guy, I forget his name still.

Shrek: "I'm already on a quest! A quest to get my swamp back!" 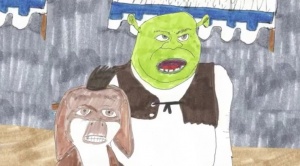 "What kind of quest?"

Shrek: "Yeah! My swamp! Where you dumped those fairytale creatures."

Farquaad: "Okay. All right, ogre, I'll make you a deal. Go on this quest for me and I'll give you your swamp back."

Shrek: "Exactly the way it was?"

Farquaad: "Right down to the last slime-covered toadstool."

Farquaad: "As good as gone."

Chris: And I guess that's it for scene 23 of Shrek.

[Chris inhales sharply through his nose, then the next segment of the film plays.]

On 12 February 2019, project creator 3GI posted to Twitter, revealing that he had kept possession of Chris' contributions, and that they were framed on his wall.[1]

Chris retweeted the photos via his new profile. 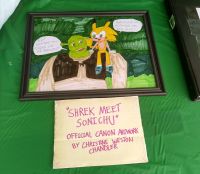 Chris also drew a piece of artwork featuring Sonichu and Shrek which was featured as a raffle item at the August 2019 Shrekfest.[2]