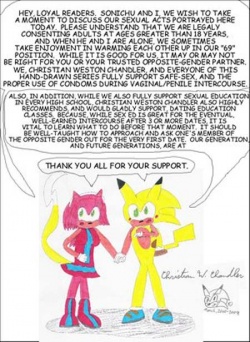 Dating Education is Chris's term for the formal instruction he believes should be provided to instruct people on how to date. As with "Sex Ed," Chris abbreviates dating education to "Date Ed," and frequently makes use of the (alleged) joke that the idea of "Date Ed" sounds "Dated." The lack of Dating Education classes is something Chris has frequently complained about, with him seemingly being unaware of (or just ignoring) the fact that an appropriately qualified therapist can teach him the social skills he desires.

Reading the Dating education comic and its related material released by Chris is an illuminating experience as it is a rather disturbing illustration of how Chris believes dating works. As such, it unintentionally serves as a rather thorough explanation as to why Chris behaves towards women the way he does, thus making it a must read for anyone wanting to learn about Chris and his mindset.

Had Chris not been sleeping or reading Goosebumps, he might have noticed that real Sex Ed courses don't provide a step-by-step description of how to pound tom-toms, but rather a source of reference for responsible sexual behaviors and the biology of the reproductive system. Chris seems to assume that the course provided the same educational experience he believes that he has acquired from pornography, as opposed to a run-down on sexually transmitted diseases and contraception. Chris even suggested that Megan could use a refresher, hinting that it would make her feel better about being violated in vivid Crayola color:

His proposed class depends on a concept that has no worldly counterpart. In short, Chris is an idiot and has no idea how anything works.

Consistent with both his autism and his own unique resistance to learning, Chris tries to seek out clear, direct steps in social interactions where his natural instincts and social skills (or lack thereof) fail him. In fact, his schools most assuredly did have "Coping Skills" instruction in their special education curriculum, which he was required to attend. Sadly, though he has been exposed to:

...none of them can offer him the checklist of winning moves that he believes exists (but that has been kept from him). So really, it's entirely his fault that he has no idea how to act around other humans, much less eligible women. For the record, Chris considers Date Ed to be one of his top three inventions[3] – right behind the Sonichu Universe and a Lego contraption for carrying Pokémon cards.

Chris's most fully-realized rationale for his pedagogical plan can be found in an essay he wrote on 11 May 2009 and later posted on the CWCipedia. Entitled "Chris Chan’s Heroic Dream for Our Community NOW and in the Future. The Solution: Dating Education," it was "originally written for a recent 2009 Community Support Contest sponsored by C-Ville's Battlefield Ford." Chris added, "too bad I did not win, but I'm not giving up on teaching our future generations the basics of Dating alongside Sexual Educaiton." The fact that Chris believes that his utterly retarded idea that all high schools in the United States, possibly the whole world, should teach their students how to talk to one another (something most shy people can fix with a counsellor or a psychologist), and should be graded on how they talk to dolls, how well they study a book written by a nine-year old and how well they score on an extremely awkward paper test, as well as the fact that these schools should go directly against American anti-discrimination laws and not let homos into a required subject, with Chris saying that "it will stop people from becoming gay, since gay people usually turn when they're lonely and in their 20's" speaks volumes on how Chris views dating, education and homosexuality. Here is the complete essay in all its glory:

Depending on how charitable your mood is, you might argue that Chris's idea for Date Ed is stupid but not insane. That is to say that it makes sense for Chris to want some guidance, and to extrapolate that to mean that other people want the same. However, any such notions will be destroyed in short order should you peruse Sonichu 9, specifically the episode containing DAT 303. DAT 303 is a thinly veiled matchmaking service, with a side order of Sex Ed and a heaping helping of complete lunacy. It boggles the mind to picture what DAT 101 or 404 might look like. Consider the following:

Required Text: How to Talk to Girls by Alec Greven