From CWCki
(Redirected from Megagi)
Jump to navigation Jump to search

Megagi was originally called Spunky Skunk;[3] the reason why Chris changed her name is unclear (although most likely due to his obsession with Megagi's creator, who happens to have a similar name). She also did not have breasts in her original drawing[3] or first appearances in the comic,[4] but Chris added them in later for unknown reasons. 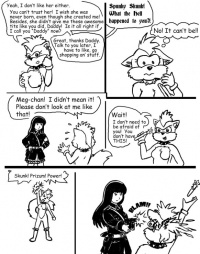