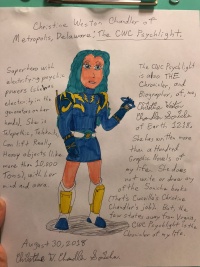 Look at those eyes, god damn.

CWC Psychlight is one of many characters created by Chris in ModNation Racers (as a male, considering he was one of Chris' pre-trans OCs) and essentially Chris's personification of the CWCki (or for historical note, the CWCipedia). She is inspired by the DC Comics Justice League series of media, particularity the free to play game DC Universe Online.[1] Her sole purpose is to chronicle Chris's life, making her the greatest CWCki editor. Like all of Chris's characters, she is stupidly overpowered, being telepathic, telekinetic, faster than the eye can see, able to time travel, and able to lift more then 10,000 tons or one to two thousand doghouses.

She is a superhero, and was created discovered by Chris in DC Universe Online and has written over a hundred graphic novels about Chris's life.[2] She lives in Metropolis, Delaware in C-197. Everything that CWC Psychlight writes about Chris is completely factual, and everything else (including this website) is merely fanfiction of him.[3] She has been writing about Chris for decades and looks very good for her age. She has also had a go at making movies about Chris.[4]

It should be noted that CWC Psychlight- even though it is consistent with Chris's logic- is definitely NOT the original creator of Chris Chan.[5]

In a coincidental twist of fate, CWC Psychlight is also autistic, and was also born as "Christopher", and then coincidentally had it changed to "Christian" too, and then, even more coincidentally, they then turned out to be trans and changed their name to "Christine". Funny, that.[5]

Although she lives in Metropolis, CWC Psychlight can be seen commuting to Gotham where, when she's not presumably writing graphic novels and movies about Chris Chan in some office building in Gotham, is also an Honorary Justice League member.[6] The reason she was made an honorary member was for "defending Metropolis and Gotham the best amongst those affected by Brainiac’s doings, as portrayed in the DCUO video game intro".[5] So chronicling isn't her only skill that's seen effective usage.

Unlike most of Chris' OCs, CWC Psychlight is NOT a Sonichu, because she doesn't have a Sonichu clone. It is implied she can time travel, and she has her own personal subspace where time is different to our own (a similar concept to the Hyperbolic Time Chamber from the Dragon Ball series.) Chris describes her as being able to go at a "human speed" of 100-500 MPH, however, this is actually FTE (faster than eyesight)[7], the fastest actual human speed being 27.8 MPH, just a little over a quarter of Psychlight's minimum speed.

CWC Psychlight has two TSSSF cards[1][8] and a ModNation Racers character.[9] This puts CWC Psychlight on a pretty low rating in terms of importance to Chris, as some of his other personas get a lot more care and attention and adaptations.