From CWCki
(Redirected from Moon)
Jump to: navigation, search 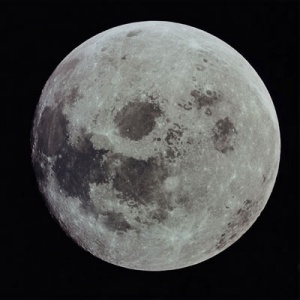 The Moon in real life...

The Moon (Luna, Σελήνη Selene) is Earth's only natural satellite. It is also the only entity within Earth's orbit that is of comparable size to Chris's ego. It plays an important role in the Sonichu universe, both as a backdrop and as an actual part of the plot. While the Moon is generally considered an object of beauty and mystery, Chris sees it as nothing more than a potential garbage dump or prison camp to send all of the world's "undesirables" to, chiefly tobacky and evil dudes. On the other hand, on 21 August 2017, Chris joined millions of other Americans in watching the Moon eclipse the Sun. The Moon was also a key component in the Idea Guys' manipulations of Chris.

Chris and the Moon

Although he has softened his stance regarding alcohol, Chris remains firmly opposed to tobacky. The Moon is where he believes a rocket containing every last scrap of the offending plant should be shot; not the Sun though, because of the "reasoning" he cobbled together in an IRC chat from January 2009. 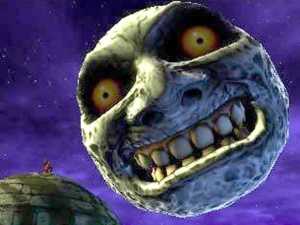 This is probably what inspired Chris's creepy stare.

The Moon first appeared in Sonichu #0, where Sonichu and Rosechu both professed their love for each other while gazing upon it. 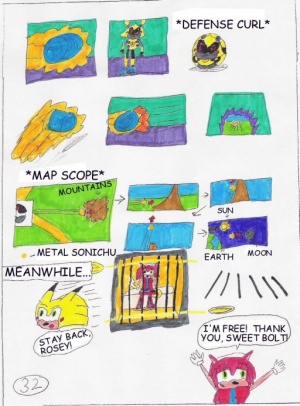 Metal Sonichu getting launched to the Moon.

In Sonichu #1, the generic, throw-away villain Metal Sonichu was defeated and tossed into the Moon by Sonic the Hedgehog and Sonichu. He is shown to survive the crash, but this never amounts to anything.

In Sonichu #6, magical moonbeams turn Chris's dog Patti Chandler into a sentient being capable of human speech for no adequately explained reason.

In Sonichu #8, it is explained that Silvana Rosechu was born and raised on the Moon by Count Graduon, who also gave her a penis for no real reason. She was quoted in an interview in an old issue of Sonichu's News Dash as saying that the Moon was "very lonely" and that there are "no friends on the Moon". How she survived there at all isn't addressed.

Sonichu #10 indicates that the CWCville authorities launch regular Moon-shot operations in partnership with NASA to do away with any contraband. Vacationers on the Moon may therefore be guaranteed a regular supply of free marijuana, tobacky, and other delightful mind-altering substances.

The Moon returns in Sonichu #11, attracting energy crystals from all of the Sonichu. This causes Sonichu and Rosechu to temporarily transform into Ultra Sonichu and The Incredible Lioness.

Chris announced on the CWC Blog that he planned to toss Count Graduon into the Moon, where Graduon would possess Metal Sonichu and become a key villain in the events of Sonichu #11 and beyond. However, Sonichu 11 does not include this at all. Count Graduon (or at least his primary vessel) was also destroyed by Chris snapping his staff in half in the previous issue, so it's not entirely clear how that would have worked.

In his high school essays

While in high school, Chris opined with tenuous coherence that his favorite modern president was John F. Kennedy because of his foresight regarding lunar exploration. "It was obvious," Chris wrote, "to put $9 billion towards space programs, he probably would have known a possible way to put a man on the moon before he put the money towards it."[1]

Chris "mooning" all his trolls.

During the Asperchu saga, Sean August Watley also ran a comic on Asperpedia named Moon-Pals, centered around the drug-induced adventures of all the forgotten Sonichu characters living on the Moon with Metal Sonichu.

By role-playing as fictional characters, the Idea Guys manipulated Chris into believing they had the capability to destroy the Moon in CWCville's dimension, and that the moon chunks would then fall onto CWCville. They used this concept to extort Chris into paying them thousands of dollars.[2]