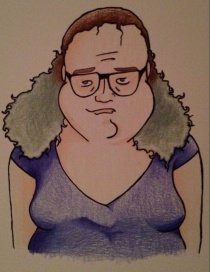 The viewer may feel disoriented, almost as if they have slipped back to 2009, as Chris once again attempts to prove his true and honest identity against an impostor's attempt. Chris reaffirms his identity as the creator of Sonichu and Rosechu, and implores his fans to boycott a troll named Francine and her unofficial merchandise. Presumably spurred on by her lack of cooperation, Chris exposes even more of Francine's poor character, including spinelessness, lechery, public indecency, and impersonation, while showcasing that he's perfectly fine with being a transphobe as long as it's against someone he doesn't like.

Hello once again. I am making this uh, video ep-, this video furthering on the uh, past video I made about reaching out to the video game directors, creators, and whatever. Firstly, I want to appeal to Nintendo of America: don't trust the fake in Seattle! This is the face! This is the face of born Christopher, changed the name legally to Christian, is now going by Christine Weston Chandler of Ruckersville, Virginia. [replaces glasses] Accept no substitutes. Pft. Even the ID would be totally different, as I have shown that photograph in the last video. And plus, [leans over to grab set of Sonichu Amiibo] I don't think anybody else would have all of the original prototypes of each individual figure, as they are, as they have been displayed on the Et-, on my Cwcville Shopping Etsy shop. [turns around to grab something] Uh, what did I do with those? Enh. I swear, if I had a dime for every time...[mumbles] One way or another...

Anyway, pfft, aside from that [stress sighs, grunts] I'm really pissed off at Jeff. I'm going by the, his male name, because he is no woman. No female soul whatsoever, regardless, [places Amiibo off-camera once more] regardless of the fact of having his balls chopped up, [in falsetto] sounding like a high pitched choirboy now! [returns to normal voice, clears throat] Mm. And even, I don't even, and there are so many worse things than pretending to be me that, and not only in selling the fake Sonichu merchandise over the past number of years, as far as I can tell, anyway. Mm! He's messed with many a woman's heart and emotions in Seattle, where he is living now. Annd he origin-, and he was born in Pittsburgh, and I wanna say once, I wanna state this once again, he moved away from Pittsburgh after a couple of black men asked him for directions or information. Scared off! Well, he had no balls to begin with. What a wuss. And not only that, but a panhandler. He's collecting Social Security in three states! Three states! Don't be abusin' that!

Oh, and I got more worse shit on him. [turns around again] Oh, that's where they went. [shows off another Amiibo display] I was gonna point this out earlier, but the three figures I've made of my half-brothers and half-sister, as I have shown in one of my recent videos, that I made into a couple of jerkops and a janekop. [puts display down] That's, that's a whole oth-, different ordeal right there. I was trying to reach this printout of his latest copycat page on OKCupid. And he has more than this page. He's done, like, he must've done like, I'm guessing three? I mean, sure, one for Jeff, one for Francine, and now [cocks eyebrow] Christine? He's trying to go under my name! That, that, that pisses me off. I mean... [blows raspberry] He's no woman! He insulted me personally in my...weight, and my skills at artistry. He is no superior. He does not hold the fact that I, I alone, created Sonichu and Rosechu personally in my mind, and then onto paper, on March 17th, 2000. And I have witnesses at Manchester High School to attest that, including the teacher in my Computer Graphics class at that time.

Anyway, I can't believe this Jeff, on the, puttin' this on his, mmph, OKCupid profile. I mean, he's like, [adopts mocking voice] "Oh, I don't read books because it's too hard. My favorite movies are My Little Pony: Equestria Girls and The Peanuts Movie. And My Little, my favorite shows are My Little Pony and Frasier!" Oh, pfft. [voice reaches very high pitch] "My favorite music is anything only middle-school girls would listen to. And my favorite food is apple slices from McDonald's. I eat there a lot because it's healthy good!" Mmph. Oy vey. Oh, and get this, this just, this throws me off right here: "Could never do without my Seattle lesbian transwoman community Member Of The Year Award." [blows raspberry] Yech. A homeless person. Homeless! Cons women, pretending to be me, just so he could spend the night with them, and the sex round is a bonus, a bonus to him. [blows another raspberry] Gettin' so much income, and sixty grand a year out of the fake Sonichu merchandise? [stress sighs] And I'm not, I have not seen one penny of that whatsoever.

But that just, but that's not the tip of the piss-me-off iceberg. What really pisses me off: playing with the hearts and mind of women! Ugh! Toying with the emotions just... [clenches fist and grunts] That's so stereotypical of any male! Oh, any let me introduce to you a few other interesting details. In an argument with his own biological elderly father about his "swapping gender identities" and whatnot, he assaulted him! Punched him during that argument. He nev-, the father never sued. But that's elder abuse right there. [stress sighs] I never struck my father. [rubs bridge of nose and closes eyes, as if in prayer] I miss you every day, Mr. C.

But regardless, he also got arrested urinating on a children's playground area. Oh, and get this fetish: lemon juice on his...into his...uretha [sic]. Peehole. [pauses in disgust] So weird. Pfft.

Aaanywho, I'm just, all, between all, between all that and much more details on, I know all about, about him. I have my sources, and I'm learning more. [pause] Between all of that and his insults to me directly in the email, I even offered him an easy way out. A settlement, if you will. And what does he do? Insults me right to me face. Spits. May as well have spit right in my face. But I implore to my fans as well, y'all know me worldwide. You've seen my face. You've never had to see this guy's face. You never had to see Jeff's face. And you know me. I've proven myself on more than ten occasions. Multiple videos. You know it, I know it, Jeff knows it. And if it wasn't for...oh yeah, he panhandles also. And that's aside from toying with the women's emotions, and the online sales of the fake Sonichu merchandise. And the quote-unquote "Adult Chronicles" video game? The content of that and the story does me no justice. It's all just a bunch of exaggerations from taking out of the context of everything amongst which that I have said and put into my books and whatnot. [sharply inhales] It just does me no justice. It's a very inferior quality. And I had no input into that whatsoever. I never, ever authorized that game. And there's just so much better. And it will be done soon. That's why I've outreached to the video game developers in the last video, among which. Anyway, I appeal to my fans definitely because I definitely could not have had all the success I had without all of you. Thank you. [stares intently into camera] And I implore y'all to just, I would say essentially, let's put Jeff out of business. I feel like I want to say that. But everybody, help me out here. Stand on my side. I would very much appreciate that. Put him down! Let me reclaim everything that is rightfully mine. [toys with hair]

Now, I admit, in the past I might have come off as, I don't know if you wanna say, "pussy," or "wishy-washy." But that's because I did not know, I did not have so many, so much knowledge back then, but I have so much more knowledge now. And I have people, and friends among them. [pause] I mean that. [thumbs up] But Jeff? No friend. [shakes head] Just another stereotypical male bastard. [takes deep breath]

Well that's about all I can say right now on the, in my personal venting. And Nintendo of America, Reggie Fils-Aimé, and every other employee over there, if this Jeff comes to you pretending to be me, remember this face. This is my face, personally. Creator of Sonichu and Rosechu and the city of Cwcville, Virginia, USA. Right here. Not his. So boot his sorry ass out the door! He don't deserve it. He don't deserve better. Cheatin' Social Security, panhandling, [sotto voce] emotionals, emotions of the women. Ugh. Ah...but yeah, very bad man. [takes on character voice] Vewy, vewy bad man. [wags finger for five seconds] And yes, Seinfeld reference. [wags finger again] It's valid. Anyway, yes, this is born Christopher, changed to Christine, Chris-, changed to Christian, going by Christine now, female soul trapped in this male body. Transitioning very well. [pause]

That's about all I can, that's all I can think of right now. Pfft. My mind goes blank, it bothers me. [pause] That's from stress, possibly the autism. I'm not saying it is, but the mental blank-outs really bother me. It makes me lose my train of thought and everything. But still, the emotions are there. And the feeling. [stress sighs, stares at camera] Thank you all. Have a good day.