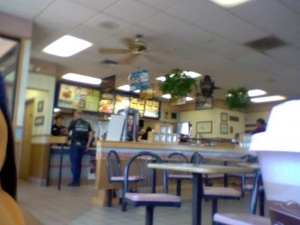 A view of the counter where behind which has its own Troublemakers.

Within this single fast-food joint of the small town of Ruckersville, VA, Bobby goes for a morning coffee and breakfast most days of the week. Sadly, though, on some of those days, along with other seinor citizens who have been going there for years for their own "Early Bird Specials", they get harassed by one or two of the snot-nosed, snooty employees.

One of which, Amanda, is one of the Part-Time Manajerks who gives her elders the coldest of shoulders. Even with the recent Twilight sweepstakes, one or two of these folks who have enjoyed the Medium Icees for a single dollar and nine cents during their limited-time promotion and received the cups with the game pieces on them, Amanda recently decided that "One Dollar is TOO LITTLE for a Piece of the Sweepstakes Action."

Amanda also really Opens Up for the Black People; she would be most friendly to any of the black people. Uncle Ruckus would really kick the shit out of the bitch for not treating us white people with good kindness and respect. All of the seinors who loyally come in for their daily morning bread would just itch for the chance to smack her ass and crack her china in due respect to the harassment she has butthurt unto them.

Not much else is known about Amanda at the moment, but the seinors have heard that she is a mother of two (probably get a daily butthurt from her every night). She is also assumed to be still married. I feel really sorry for the dude who has put up with that woman for the amount of time they've been married.

It has been reported that Chrissy has been sighted there, but no photographs has been taken, aside from the one above, of him inside the restaurant.

Photographic evidence should be sent to cwcsightings(AT)hotmail.com! Also, feel free to show off to everyone around you at the time the fresh Gay Trucker Photographs are taken. Users will be greatly rewarded with china and/or pickles!