From CWCki
(Redirected from Watchman)
Jump to: navigation, search 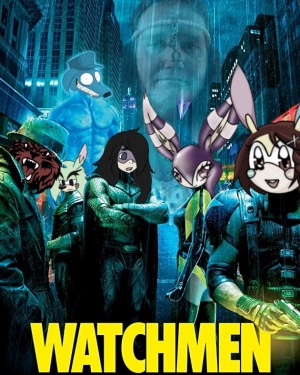 The Watchmen is the name given to a group of fantastical enablers whose members serve as gatekeepers and white knights for Chris, in a similar manner as their predecessors, the Guard Dogs. Their goal is to keep away malicious individuals trying to troll or scam Chris – most notably, Praetor, who among other things wanted to get Chris to taze himself with a stun gun.

As a faction, the Watchmen were instrumental in numerous events over the course of late 2019 onwards, such as attempting to dismantle Jacob Sockness’s influence over Chris and drive him off. They also shut down the Arbitarch CWC Alliance Discord server when the true intent of the server was revealed. Chris has maintained contact with the Watchmen since they first approached him, including chatting with them on Google Hangouts and over Discord. The Watchmen were behind the Discord leaks in August 2020.

Their approach is controversial as they gained Chris's favor by means of enabling his delusions by pretending to be fellow CPU goddesses and encouraging his beliefs in magical thinking and the Dimensional Merge.

While they share a name with the 1986/1987 DC Comics limited series by Alan Moore, David Gibbons, and John Higgins, the 2009 film adaptation (which is not that long of a movie, according to Emily and The Man in the Pickle Suit), the 2019 HBO series, and the various comic book spin-offs, the Watchmen do not take inspiration from the franchise, in contrast to how The Miscreants modeled themselves after the Patriots from Metal Gear Solid. Nonetheless, fan art from Christorians and other avid observers of Chris make this connection. 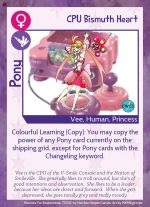 Bismuth, also known by Heart, Naught, and Kiwi Farms handle anameisaname, is the replacement leader of the Watchmen, taking over after Owls's removal.[2] Bismuth monitors potential weens or enablers. 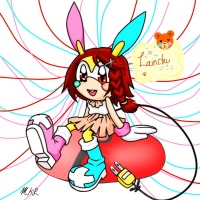 Lainchu, also known Lainchu the Chronicler, is an OC created by Chris, whose purpose is to document Chris's activities (and unofficially, to provide Christorians with first hand information). Since 7 August 2020, Chris has assigned the role to one of the Watchmen, with the role initially assigned to the CWCki Discord server creator, Klop; however, as of late August 2020, Klop has resigned from the role and another user has taken on the mantle, with Chris none the wiser.

Chris based the OC on the protagonist of the anime, Serial Experiments Lain, in which a teenage girl finds herself engaging with a virtual world network, reminiscent of the internet. 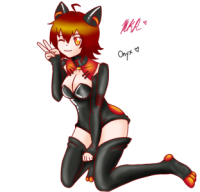 The WCT, also known as WildCat and Neko Onyx, is a Watchmen member who has archived calls involving Chris. Before becoming a Watchman, he had been observing Chris and watching Chris-Chan: A Comprehensive History[3]

The inspiration for Chris's Kylechu OC, Kyle appeared in the Google Hangout chats. 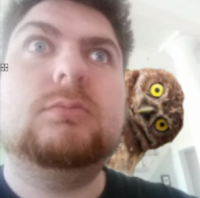 Owls, also known as Ryan and CpuTurquoiseHeart,[4] was the original leader of the Watchmen group, who was later discredited as a person with shady motives.[2] Owls set MKRNightVee up to interact with Chris and founded the Watchmen's Discord server. Owls also acted as a liaison between MKRNightVee's group and Guard Dogs member Marvin. However, Owls lied to both about his intentions and later disappeared from the group.[2]

AquaDiamond8 is a Twitter user who has bounced from being a ween,[7] to a white knight, to an enabler and Watchman. In November 2019, during the Jacob Sockness saga, in order to lure Chris away from Sockness, Aqua joined the Watchmen and embraced Chris's delusional beliefs, changing her Twitter handle to CPU Goddess Aqua of the Mac Book Pro. Later, Aqua began drawing fanart of her OC interacting with Magi-Chan.[8] She then posted a Pokémon drawing, claiming it to be an alt-dimension Magi-Chan:[9]

As of early September 2020, Aqua is confirmed to no longer be involved with the Watchmen's activities: 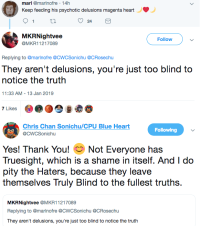 Meghan Kathleen Ringo (born 24 April 1992), also known under the aliases MKRNightVee, CPUMagentaHeart and thepixietailartist) appeared in early 2019. She got into contact with Chris through Owls looking up Chris's phone number for her.[13][2] She presented herself to Chris as being the CPU goddess of the Nintendo Switch, offering him validation on his fantasies of having magic powers.[14] She has stated that her goal isn't to feed into Chris's delusions so much as to offer advice and help.[15] Chris offered her several of his possessions in his Last Will and Testament.

She set up a Discord group for Chris, telling her friends to role-play as CPU goddesses to gain Chris's trust, while also instituting a no-trolling rule.[16]

During the Jacob Sockness saga, in which Sockness attempted to manipulate Chris into a sexual relationship, MKR saw the danger in Sockness's intent, and steered Chris away from him in summer 2019; Sockness, who at the time was engaging in a full-scale war against Chris's enablers, followers and critics alike, considered MKR to be an enemy of his, and abused her verbally on Twitter as his second dramatic cycle approached its climax in early November. She, as well as Aqua, largely mitigated Sockness's influence over Chris, though Chris was still willing to listen to Sockness.

In March 2021, she gave up on helping Chris when she learned that he was planning on playing with a taser with his new friend group Praetor, sending an angry Tweet directed towards him which expressed her disdain, before deleting her Twitter account altogether a few days later.[17]

Around January 2019, Owls, motive unknown, helped MKRNightVee to get into contact with Chris. MKR attempted to help Chris find CPU goddesses to talk to, telling her friends to role-play as goddesses to him over Discord; Owls acted as a gatekeeper between MKR's friends and Chris.[4] Owls also acted as liaison between the CPU group and the Guard Dogs group (the latter group also gatekeepers to Chris at the time) but according to Naught, Owls misrepresented his true goals to both groups and gave them false information. Owls later disappeared.[2]

A Christorian interviewed Naught on 4 September 2020, asking some clarifying questions about the Watchmen. They posted the answers on the Official CWCki Discord. The interviewer's questions are color-coded red, with Naught's responses color-coded white.