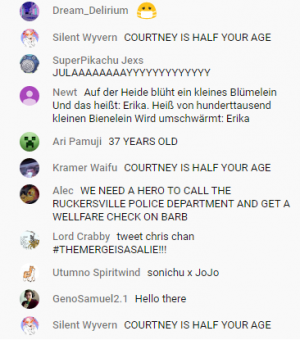 Amongst the normal barrage of A-Logs, weens, enablers and passive observers, numerous viewers quickly noticed the rather significant age gap between Chris and SNT, especially as the fanfic began entering racier territory.

Live Reading of SNT Vs Sonichu, Part 2 is a livestream streamed by Chris on 11 February 2020, in which Chris reads the seventh through the last chapter of Sonichu Vs SNT by opuscon987, a rather disturbing fanfic about him and ProjectSNT with romantic aspects involved. The livestream was intended to continue off from ProjectSNT's reading of the fan fiction, who read the first half in her birthday livestream ten months earlier[2]. Notable events include weens ordering Chris a pizza twice in quick succession (causing him to inexplicably paraphrase lyrics from a Sesame Street song before checking the door), and Clover and Snoopy baying loudly at several points throughout the livestream, thoroughly annoying Chris.

Watch me read Chapters 7 to the end of the FanFic, “SNT Vs Sonichu”, personally. For the first six chapters, I refer you all to Courtney’s original reading she did on her Birthday in 2019; she had a Ton of Courage getting as far as she did in reading that.

Chris: Somewhere in the dark I thought I heard the dog bark! Excuse me.

[Chris clambers over the bed, and disappears from view. Clover and Snoopy continue baying.]

[One of the dogs yelps.]

Chris: What? Oh fuck. I'll deal with it, I'll send them away.

Chris: Sorry, no one ordered a pizza.

[Chris reappears after sighing off camera. He clambers back onto the bed with a dull expression.]

Alright, whose joke idea was it to order a pizza?! And try sending my way? You interrupted this thing, and you know what? That says what happened that got me blacklisted from any deliveries from Papa Johns! Why they would never deliver any pizza from this place [extends arm] you FRICKIN-FRACKIN HATING TROLLS! NNNNNNNNNNNNNGH!

Approximately forty minutes later, the Weens struck again, and ordered another pizza to 14BC; Clover and Snoopy were no less excited by this than the previous attempt.

Chris: When Sonic, SNT, and Courtney opened their eyes, they found themselves on what Courtney recognized as a kind of reverse world, just like where Giratina lived in the Pokémon game or movie.

[Clover and Snoopy begin baying and howling once again.]

[With less enthusiasm than before] Somewhere in the dark I thought I heard the dogs bark.

Oh, I needed to take a restroom break anyway. [He puts down his Amethyst water bottle] Stay tuned for further details, we'll be right back after these massages. [Chris clambers over and off the bed once again, then disappears from view.]

[Birdsong is audible in the background, somehow not drowned out by the dogs barking.]

Barb: It's another delivery.

Chris: Sorry, I didn't order anything.

[For almost a minute, nothing can be heard except the dogs baying, and birds singing.]

Chris: Have a good night.

Chris: YYYYYEEEEEEEEESSSSSSSSSS! I'm going to go pee, pardon me. [Long pause ensues. Chris eventually returns, slightly offscreen, before whispering.] Pizza... Shh. [Chris briefly looks at an unidentified Pokemon game while only his elbow is visible, and Raichu's cry is heard three times.] Pizza... [He puts the game down and climbs back onto his bed. After seating himself and grasping his amethyst water bottle, he glares at the camera in silence for several seconds.]