An Ol' Classic Dream, later renamed RomanticLabyrinth, is the tenth animation Chris posted to Flipnote Hatena. It is essentially one of Chris's wet dreams conveyed in Flipnote form and is, of course, completely horrifying. It is, as the name suggests, based on the watery maze dream, albeit featuring (censored) genitalia (complete with erection), nipples, and china, as well as implied sex--note that this is predictably and clearly against the rules of Flipnote Hatena. Chris then demands that his fellow Flipnote Hatena users shower him in literally millions of stars in order for him to post an uncensored version, which, of course, would violate the website's terms of service even more and which, regardless, no one would ever want to see.

Flipnote Hatena, being a family-friendly organization totally antithetical to Chris's perverse delusions, removed the video minutes after it went up. Fortunately, citizens of the CWCki were able to save an archival copy of the animation even faster, and TheCWCvilleLibrary had soon mirrored it.

This animation features some of Chris's more disturbing thoughts on romance: sex is love, people fall in love from merely looking at each other, and a stranger getting visibly erect in front of you isn't creepy whatsoever. Needless to say, Chris probably mass debates to this.

Also of note is that, if you look really close near the end of the video (where Chris says "If only I knew who you are in reality") a big black mess appears near his legs, making it look like he jizzed and shat himself thinking about this mystery woman.

Ivy supplied some interesting background to this: 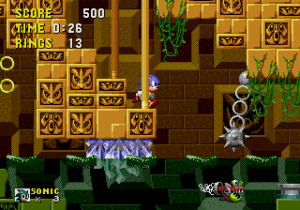 A labyrinth filled with water...does this remind you of anything?

[A maze is displayed, showing a staircase and two dots. The dots move towards each other. The camera zooms in on the dots, and an arrow is drawn pointing to one of them, labeled "ME".]

[The stick figures are shown in a different, watery room. They move towards each other and make out. A heart appears around the two of them.]

[This situation is then shown to be a dream that Chris is having.]

LOVELY WOMAN, I LOVE YOU! ♥

IF ONLY I KNEW WHO YOU ARE IN REALITY

TO ENJOY THIS DREAM UNCENSORED, OFFER A TOTAL SUM OF FIVE MILLION...

Music: "City in the Clouds" by Howard Drossin

Have a Good and Safe Day. Christian W. Chandler.

The third and final version.

As any sane person would expect, the Flipnote mods brought the hammer down on Chris's sex fantasy very, very quickly. And as anybody with even a casual knowledge of Chris would guess, he was less than happy. Not long after the first version was taken down, Chris put up a new version with both characters wearing hastily-drawn-on clothing (reminiscent of the edits made to Sonichu #8) and the hard-on replaced by a strange white cloud. This was removed after being reported again. Chris then attempted to upload a third version, this one preceded by a long self-aggrandizing rant begging the site's administrators not to delete it and to participate in his crusade against any form of negative feedback.

The second version followed after the text. The mods deleted this one so quickly that nobody was actually able to see the video on its own page. Its thumbnail is all the evidence we have that it ever existed at all.

On July 2, Chris attempted to upload the second version a fourth time, which led to his DSi being permanently blocked from the service.

Along with several other videos, the second version was uploaded a fifth time on July 24, after Chris linked his DSi to a different account to evade his ban. As one point, the fifth upload had over 9001 stars. It was taken down on 26 July.

Shortly after the fifth version was taken down, Chris uploaded the second version a sixth time. It remained unblocked on Hatena until it shut down in 2013.