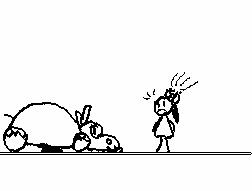 It stops making sense after this point.

HippoOnYourHead is Chris's third Flipnote Hatena animation, uploaded to his profile on 24 June 2010. This Flipnote is Chris's first attempt in the program at an actual narrative, as opposed to just an animation test or blatant theft. It also sets the basic tone that future Flipnotes would conform to: stick figures joylessly acting out "funny" scenes. Chris, who assumes that he's a master of comedy, decided to put some effort into these videos. Many of his sockpuppet accounts gave positive reviews of this video, so it's completely unclear how many people actually watched it.

This is not the first time Chris has brought up hippos on heads as something he believes is funny. He first brought up this example of random-access humor when he edited the ED page. In the Regina e-mails it was all but pointed out to him how terribly unfunny it truly is. The phrase reappeared in a November 2015 video in which he threatened local manajerks with "the hippopotamus weights upon each of our heads forever". A Facebook post by Chris[1] sheds some light on what he might consider funny about this joke: the hippo is a reference to the brain's hippocampus.

Chris also mentions a "Buck Williams"; it is unclear whether this refers to the basketball player, the character in post-Rapture novel series Left Behind, or if it's simply another made-up "humorous" name. However, given that he says "signed Buck Williams", and considering Chris's love for old movies and television, it may be taken from a confession note read aloud at the end of the The Three Stooges classic Disorder in the Court .

The Flipnote ends with Chris begging for stars on Flipnote Hatena's rating system, proving that even when "off the internet", he still wants his fanbase to do him favors. 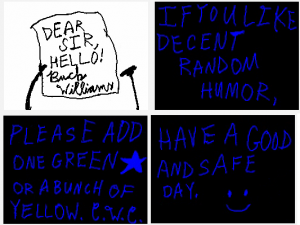 If you don't, I'll be forced to give myself stars!

[A poorly-drawn boy and girl stand facing each other, when a hippo spontaneously falls on the boy's head]

Girl: Ah! You have a hippo on your head.

Boy: Well, don't just stand there, write a letter on me!

[The girl walks over to the flattened boy, picks him up, and starts to write]

Writing: If you like decent random humor, please add one green star or a bunch of yellow. CWC. Have a good and safe day. :)