From CWCki
(Redirected from Bluespike)
Jump to navigation Jump to search

BlueSpike's treatment of Chris is considered to be sadistic, being emotionally and even sexually abusive during the Mumble call where he revealed himself as Julie. His harsh treatment of Chris was unparalleled by any of Chris's past trolls, and would not be matched again until the likes of the Idea Guys got ahold nearly a decade later. Of the classic trolls, Chris has noted that he hates BlueSpike the most for the traumatic experience he caused during that Mumble call, along with tricking him into taking a long road trip that scared his parents half to death.[6] BlueSpike effectively provided the model that all weens would use – though, unlike most that would follow, he was actually successful in his goals – but he eventually expressed regret for his actions years later.

Julie Milvana[7] (born 13 July 1989[8]) was a Molvanîan Methodist[9] Sonichu fan who became Chris's sweetheart after PandaHalo. Her kidnap by her evil brother Max led to Chris's ill-fated rescue mission to Cleveland. "Julie" first appeared in IRC in December 2008, suggesting the infamous Tour of Chris's House video.[10] She later posed a ton of Sonichu questions submitted by fans[11] and was invited to Sonichu Girls.

Chris's loyalty to Julie would be proven on 26 February 2009, when Max, her evil, mysterious brother, kidnapped her and held her against her will. In response, Chris valiantly travelled to Ohio in a bid to rescue her and got his parents all worried. (His ancestors' spirits had wished him "a Safe Trip to Ohio" two days prior at Aunt Corrina's funeral.)[16] Unfortunately, because Chris got the "wrong" address, he ended up at a run-down house in the ghetto that was inhabited by an elderly black woman.[17]

When Chris chose Sarah May over her, Julie was crushed. Chris apologized, and then abruptly went back to talking about vidya.[18] Clyde Cash made more serious threats against Julie, forcing Chris to upload a famous 5 February 2009 video admitting that he was gay.[18] Once Chris got it into his head that PandaHalo had burned to death in a wildfire, he began to focus even more on Julie as a sweetheart.

Chris received a letter written by Julie, the first physical proof of her "existence". In it, it details the love professed by her to Chris. That Valentine's Day, Chris uploaded a LBP level, and Chris and Julie brought their relationship to the next level with cybersex. Bob Chandler walked in, and the rest is history. Chris's parents didn't believe that Julie was TRUE and HONEST.[19]

On 3 March 2009, Max gained control of Chris's PlayStation Network account, and during an hour-long audio session threatened to sell the PSN account and forbid Julie from seeing Chris. Chris was coerced into declaring BILLY MAYS to be the mayor of CWCville and shoving the pieces of his destroyed Sonichu medallion up his anal cavity, before he was able to talk to Julie, at which point Julie admits that both she and Max were the figments of BlueSpike's imagination. At no point did BlueSpike even mention the sex tape (which had already gotten nearly 2 million hits on SlutLoad). BlueSpike's female voice is an unconvincing falsetto, which makes it all the more surprising that it worked so well on Chris. This incident shattered both his heart level – and his anus – to 0%. 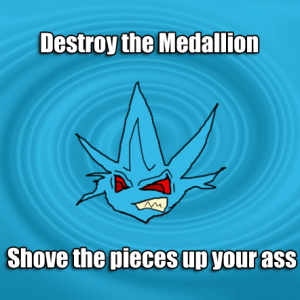 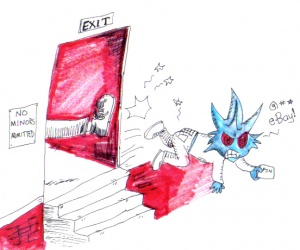 BlueSpike was kicked out of The Miscreants following the incident.

Even as Julie Reveals Herself was being recorded, other trolls can be heard remarking that it was "horrible" and demanding BlueSpike to stop. Early on in Mumble 11, which was recorded a day later, other trolls outright tell BlueSpike to shut up and that nobody likes him before he gets muted.

While one might think that this level of physical and mental abuse would leave lasting scars, BlueSpike's trolling initially appeared to have virtually no evident long-term impact on Chris. Just a few weeks after Julie revealed her true identity, Chris had moved onto thinking he'd found another sweetheart online, and just a few weeks after that he had no trouble believing that he was having virtual sex with a famous Disney Channel celebrity. The main effect it had was that although Chris made a new Sonichu medallion, he stopped wearing it until 1 July 2009.

However, years later, Chris stated that BlueSpike's psychological and sexual abuse of him was in the top two most traumatic experiences in his life, with the other contender being the incident at Nathanael Greene Elementary School where he was pinned down by faculty during an autistic meltdown. Since Chris hasn't provided details of how he felt after the humiliating experience, figuring out how this affected him is left up to speculation. He also sounded reluctant to talk about the incident during Calling Out "Julaaaay" - David, a video where he attempted to dox lolcow David Harlow as being BlueSpike (due to trolls feeding him misinformation), and during the BraveryJerk Interviews, he is shocked when BraveryJerk brings up the incident.

Chris came to believe that BlueSpike was killed at the hands of Clyde Cash, from an offhand comment by Cash in Mumble 12. On his version of the ED page, Chris stated that "That little S.O.B. later died at the hands of the "Starscream" Troll, Clyde Cash." Of course, this statement was later revealed to be a complete and utter falsehood . Nonetheless, even eight years after the events of 23 August 2011, Chris still believes that BlueSpike is dead.[21]

Even if Chris did make a video about who BlueSpike really was, it would have been for naught. The personal information Chris had actually belonged to David Harlow, a lolcow also known as Nesshelper. This is evidenced by Nesshelper and BlueSpike apparently sharing the same first name, the "real" photo of BlueSpike being a closeup of this picture of Nesshelper, and Chris' claim of BlueSpike liking big rooms, which references a video rant where Nesshelper complained about the size of a hotel room he was staying in. Aside from not being a troll and having no reason nor motivation to go after Chris, the fact that Nesshelper sounds nothing like BlueSpike in his videos makes it clear they are not the same person. Furthermore, Nesshelper was born on 9 July, 1985[22] and therefore would have been 23 years old during the Julie saga. 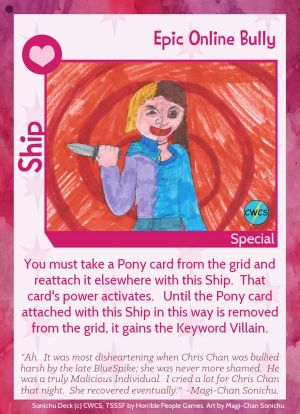 BlueSpike is easily one of the most polarizing trolls in Christory, competing with the Idea Guys. Most trolls tend to frown on BlueSpike and his methods, as they echo those of weens, enablers, and A-Logs. Nevertheless, some weens still yearn to return to the sadistic days of BlueSpike, in hopes of an age of trolling where physical pain is inflicted upon Chris. Since 2009, BlueSpike has come of age and matured; he now has a profile on Kiwi Farms,[2] which has been given the "Christorical Figure" verification by forum moderators. When asked to reflect upon his time trolling Chris, he wrote:[23]

On August 28, 2017, BlueSpike responded to a question on his Kiwi Farms[24] account asking if given the opportunity he would "do it all again". He responded:

Even with the passing of the Idea Guys and Jacob Sockness, BlueSpike remains to be Chris's least favorite troll.[25]

With BlueSpike's identity still remaining a secret, it's natural people would try to find out who was behind the persona; this has nevertheless resulted in some people being improperly tagged as BlueSpike.

A handful of people have speculated that BlueSpike may be Waymuu, a YouTube Pooper and concert archivist who, as a kid in 2009 and 2010, made A-Loggy rants towards Chris. These claims are bullshit and based entirely on rumors from Reddit and old comments on his videos and on imageboards. Waymuu was 11 in 2009, thus making it impossible for him to be BlueSpike, something confirmed by both a video he'd later make debunking the rumors, and by a Thomas the Tank Engine gag dub he made in 2011 that stated his then-age (13) in the title. While the two did have similar voices around the time, prepubescent boys tend to have similar-sounding voices in general, and Waymuu has different speech patterns and inflections in his. Furthermore, Waymuu had no other sort of involvement in the trolling of Chris outside of making said rants and lurking his ED page.