Chris spends 39 minutes drawing line work for one page of Sonichu 11, the first new page created 561 days after he quit working on the comic in 2015. And in a move rivaling that of the Brutal Legend video, Chris's voice is not heard throughout the live stream, though the Playroom theme continues to drone on. Clearly it was too much of a hassle to do a simple mic check before starting the stream, showing that old habits die hard when it comes to Chris.

Chris spends 1 hour and 38 minutes drawing, still with the mic off - even though he is seen talking during the livestream. He reveals that he is re-using his technique of including photos of himself for comic panels, which he had done in Sonichu 6. He requests donations of $10 each through Paypal.me or a pledge on Patreon.

Chris remembers to use the mic this time. He films himself using Photoshop on a laptop for an hour and a half, putting together a collage of photos of himself and his parents mixed with drawings of the Sonichu klan. 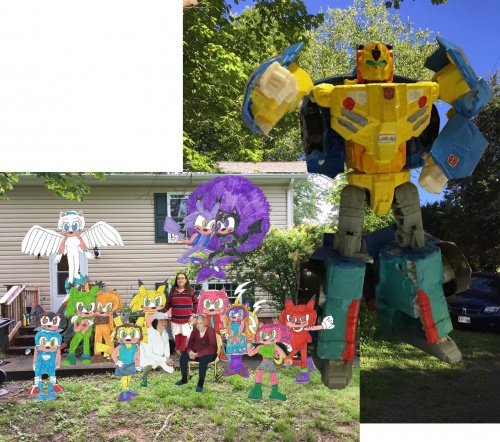 The end result of hours of drawing and editing.

[Chris stands in the middle of his room]--ve fro--from home once again, with another live drawing... special. But except this time, we have already done the drawings, and scanned them into the computer... of which we are going to put... these pictures... onto to the pre... taken... photographs... for my--for the eleventh book. So, right now, I'll be transferring you live to my laptop. (ugh) And I gotta switch the input, well, wait, no I dont- yes I do. Cause I want my Britney Spears to... [Unintelligable] I want my Britney Spears...

Alright so yeah; y´all get to see my laptop for once. Okay so right I have my flashdrive with the photographs for these special portions of the special pannels for these pages... For this- for this video were gonna- were gonna put together the group photo in front of the house. So anyways im on my external flashdrive... Find the photo...Okay so thats the first photo, and we need to resize it, [ugh] not only for the resolution, but for the width of the page- pannel. And we gotta have the resolutions match, uh so anyways as for to match with what I have so far for a previous idea, I got out me and my mom and my dad I have the picture so I gotta find the file with these cropped out portions that ive already made. I printed these out for my s- for my referance. I may have to do a little erasing on the pictres itself as I put em´ in and of course they´ll be resized, they´ll individually resized to match. Aight so- so thats me, and im bringing in my mom, and the reason her legs look green is because this was a photo taken were she was standing in the garden. But for the sake- but fortunatley these two pictures of my dad and my mom were from the same photograph, except for the sweater, and I had to give her her house coat and I had to give him his sweater cause it was- cause in the book here it was December 2008.

Oh by the way any time during this video... please, please, /please/ donate to the link below in the description of this livestream. I´m only gonna ask that once for right now while I work on this. Anyways I gotta get it all sized to match so we´re gonna- so we´re [unintelligable] gonna take care of that first and take it- my polygon and zoom in on me first cause I´m in the center of the thing, and were just gonna crop me out... uhm and this is a recent photo sure but you did know that this shirt still did exist back in 2008, and this is part of the story where I ended up cause I- cause this verion of myself has seen me in the future, which is the present, and I´m gettin´ a head start in 2008 essentiallly so just ignore the braclet on my arm. Just pretend this picture is part of a 2008 group photo.

Chris spends an hour and 44 minutes drawing and coloring a page for the original Sonichu #12-9, which was originally a crossover story between Sonichu and characters from YouTube channel Planet Dolan.

Live from home, and...I just heard that Planet Dolan's doing a drawing competition. So, with what I started as just a cover, I'm gonna do as an entry for the contest--I see it as a [something]-ful opportunity. So without further ado, let's get y'all down to my drawing level.

[Chris aims the camera at the desk. The camera begins wobbling.]

[Chris push a button on a remote, chortles, and adjusts the camera.]

Anyway, so, in the meantime, I'm puttin' this on my PC so we can enjoy...the music...that I like to listen to.

This is music from uh, Ashleigh Ball's new album, Love is Gold. It is very good, seven tracks. My favorite song of it is Shining Colors but all her songs are catchy. So with her music being included, uh, I give credit to her regardless... Uh, this video will not be monetized.

But anyway, um... So with that, what I'm going to do is... I'm making three section, as in what I had in my idea for...amongst the story arcs of my Sonichu / Planet Dolan crossover special. It'd just be kinda like a preview, like a trailer kinda thing. So, it'd be like... One story arc section there [points at top panel], then another one here [points at middle panel], and then a third one there [points at bottom panel]. And this one-page trailer, "trailer" using quotes, will be my entry into the--into this competition. So without further ado, here's a live art drawing stream.