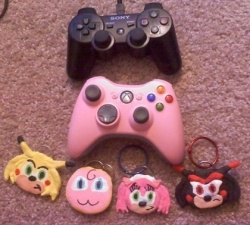 The Medallions serve as Chris's connection to the spirit realm.

Chris's beliefs and behaviors, even when he was still a professed Christian, tend towards a shamanistic mindset, where God is a force to be controlled and the universe can be influenced by various mystic rituals.

While Chris has used the Curse-ye-ha-me-ha in reality, he never took it too seriously, at least until he used it on Liquid Chris in a video. With the "kidnapping" of Liquid, he then realized that he had "the power" really to curse people. He also developed a new ability to bless people via the Forgiveness Blessings skill. He honestly seems to believe that these powers are real, even stating in one video that if it works, then he knows he has "the power." GaoGaiGar fans then promptly wanted to hit Chris for his abuse of ZA POWER. Chris later stated in a music video that if people antagonize him, they will be cursed, but if you're TRUE and HONEST, you will receive blessings.

The most notorious example is the curse-ye-ha-me-ha, a power that supposedly bestows terrible fortune upon the recipient. Chris has performed this curse on innumerable occasions, both over the Internet and in public. He has even retracted the curse (albeit reluctantly) on at least three occasions[1][2][3] with a "Forgiveness Blessing" which further cements Chris's belief in its efficacy.

In Chris's case, he seems to believe that his tirades and tantrums will somehow affect his perceived enemies. His attacks on the Clown Doll, for instance, are a metaphorical threat, but also suggest an attempt at somehow literally harming the trolls through sympathetic magic, like a voodoo doll. He views his revenge against his enemies in the comic or in Soul Calibur III as being equivalent to actual revenge, rather than simply venting.

The world of CWCville is also a spirit realm, where Chris is almighty and can create and shape it as he pleases due to his power of "creativity". It exists outside, but parallel, to the real world, and sometimes Chris seems to honestly believe that it's a real place, even if it's just imaginary. The idea of this spirit realm became more valid when, in a video, Chris claimed that the soul of his dead dog (now living in CWCville) would devour Alec Benson Leary's soul and haunt his dreams. 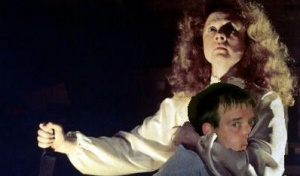 Thou shalt not suffer a CWC to live.

Through Chris's perception of God as an instrument of his will comes the delusion that he has magical powers that will permit him to eventually succeed over the enemies that he is unable to dispatch by any more conventional means.

Chris's sorcery was among his more egregious behaviors that were not merely atypical of a Christian, but in fact explicitly proscribed by his faith. Galatians 5:19-20 lists witchcraft as one of the more blatant acts of sin, and Exodus 22:18 commands "thou shalt not suffer a witch to live". That's right, there's a Biblical mandate for Chris's death. Alec Benson Leary, in one of his phone calls with Chris, attempted to point out the thoroughly un-Christian nature of Chris's dabbling in black magic, but his reasoning appeared to have little effect. Of course, his magical practises have only become even more blatant since proclaiming himself a CPU goddess, including threatening trolls on social media with supernatural retribution, meted out by himself.

Chris believes he has psychic powers that can inflict harm on his enemies. 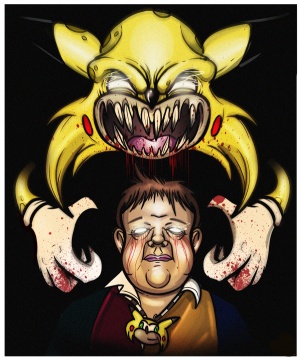 What Chris thinks his curses are capable of.

He also thinks that he has the power to brainwash people into following his commands, among other latent powers that he may discover when the opportunity presents itself.[4] All of this magic is supposedly powered by his preferred personal relic du jour - either the medallion or the Amnyfest Ring. How these items came to be imbued with magical properties has not been addressed.

Chris also appears to believe that he can, to an extent, talk to the deceased. He told Sarah May that when he touched his dead Aunt Corrina's hand, he could hear her spirit, along with the spirits of his grandparents and great-grandparents. He also claimed that GodJesus told him to "make the trip and go to Julie". Additionally, Chris believes that he can harness the spirits of the dead to do his bidding, notably when he threatened Megan with revenge by him and his father's ghost, and when he warned Alec Benson Leary that his dead dog would have his soul for dinner and haunt his nightmares. During his time masquerading as JenkinsJinkies on Trollin Train, Chris hoped to dissuade trolls by claiming that his house was haunted, describing an alleged encounter with the vengeful ghosts of Patti and his younger self. Chris apparently believed that trolls would heed this threat.

When asked by a fan how he came to learn of his powers, Chris replied they were evidenced by Mary Lee Walsh's reputation going "DOWN": 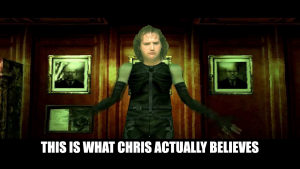 This is textbook magical thinking. This gives Chris a belief of some degree of power over his own life, no matter how illusory. This use of fantasy is considered by the psychological community to be an immature defense mechanism.

Since 2016, Chris has watched a myriad of Subliminal Frequency Hypnosis videos on YouTube, and believes that the marketed effects of the binaural beats he listens to will actually occur. These videos promise bizarre results, such as attracting love, becoming a hermaphrodite, and learning telekinesis.

Throughout the mid-2010s, Chris added several concepts from New Age spirituality to his shamanism, including astral projection and the third eye (using them as methods to visit his imaginary friends). He also took an interest in mystical rocks - such as healing crystals - keeping a pouch full of them around his neck, even though it caused him neck pain[6].