From CWCki
(Redirected from Niggo)
Jump to navigation Jump to search

Niggos is one of Chris's many minced oaths, this one meant to refer to black people. While he only used the term once, it has become a popular term among Christorians that use it to allude to Chris's history of problematic behavior where African American people are concerned. 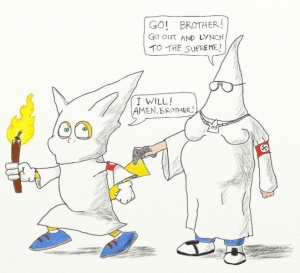 Thankfully, this is not what Chris actually believes.

His only known use of the term was in the 3 March 2009 chat, where BlueSpike coerced him into saying "BILLY MAYS is the new mayor of CWCville, and Christian Chandler will be thrown in CWCville jail, where he will be raped by a bunch of niggers." Chris repeated the line as ordered, but ignored his instructions and attempted to outsmart BlueSpike by saying "niggos" instead of the dreaded N-word. Yes, out of all the things Chris could have done, like...

He chose to coin a dumb and offensive term which, as if to add insult to injury, sounds like a lame brand of cereal. It should be noted that Chris's creativity was completely in vain. BlueSpike pointed out Chris's stupidity, and our autistic hero then went on to to spell out "nigger" properly several times. He even got the hang of it and started singing "Don't Trust Them New Niggas Over There" on his own will until BlueSpike cussed him out for it. Chris has done this more than once before.[1][2]

Chris and the actual N-word

Chris has used "nigga" or "nigger" on occasion, often in quotation.

Chris's first known use of the word nigger is in Mumble 7, recorded 13 February 2009. Chris is asked if he watches the Adult Swim sitcom The Boondocks, and when he answers in the affirmative, he is asked to do an impression of the self-hating black character Uncle Ruckus. He responds by quoting the line "Don't trust them new niggers over there!" from the series' premiere episode. He would repeat this performance in Mumble 8 and BlueSpike PSN Chat 3.5. In the BlueSpike Skype Logs 10 and 11, however, Chris refuses to type the word, rendering it as "n*ggers".

In June 2009 Chris made up and sang a parody version of Uncle Ruckus's song "Don't Trust Them New Niggas Over There" called "Don't Trust Any Homos Over There". He modified most of the lyrics to make fun of gay people to establish his commitment to heterosexuality but leaves in references to "nigga fingas on the trigga".

Chris called the troll Surfshack Tito a nigger multiple times, both orally in the Chris Drops the N-Bomb video from 17 March 2010 and in writing in the Surfshack Tito e-mails, released shortly afterwards – even though Tito, like the Rocket Power character he's named after, is Hawaiian, not black. Tito, noticing this, made a video response to Chris using footage of an obese black YouTuber, obscuring his face while dubbing over an apology to Chris.

In the Lars Call, Chris says "I'll be yo nigga" and "I'm yo nigga" when prompted by Lars.

Once again referencing The Boondocks, Chris states in a March 2021 Twitter thread that the black Sonichu character Inos is not a victim of "Nigga Moments", a term used in the episode "Granddad's Fight" to refer to violent conflicts between two black men over petty incidents.

It should be reiterated that Chris only uses the words "nigger" and "nigga" when prompted by trolls or when quoting songs and TV shows. While his handling of race relations in his webcomic and in real life is definitely cringe-inducing, it's likely that the usage of slurs comes less from a place of deep-seated racial hatred and ignorance on his part, and it's more often a result of Chris flipping his lid after being manipulated.