Found Chris while searching for Holding out for a hero, I click random page and fix things that are not in place.

It is dead but incase you want to check out the legendary server, click this link.

Write your message on paper, put it in a bottle and throw it into the pacific ocean between 2am and 2:15am. Or go to /b/'s cock rating thread, if you find anything >10 inches, its probably me.

If these fail, then contact me on kiwi farms - kolp1607

My sandbox, feel free to edit anything

Things that should be investigated further

1) Chris has bought bottlecaps from the Fallout X MLP fanfic, Fallout:Equestria. See if any weens or enablers get anything out of Chris regarding this.

2) A user by the name of Christorian who has been inactive for 4 years made his first edit to the CWCki on 21 June 2020, they added "Though, in reviewing the incidents of my administration, " To the October 2016 Video Requests page in between two category templates. This phrase is from George Washington's farewell speech and also spoken in the Broadway musical, Hamilton. Need to IP check this user.

5) In 2011 a troll pretended to be The Wallflower told Chris they were angry at him for namedropping her. User 4Macie from the CWCki and their friend were the trolls, Chris responded to them via youtube. 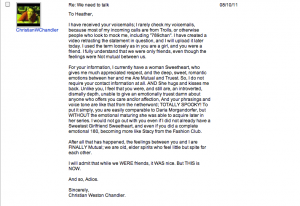 This is the screenshot of Chris' response

Here is the full transcript of the mails and response

I guess I can always post the Mails here:

My troll friend first started off by calling Chris and leaving a voicemail saying that she was a certain person and that this certain person was very angry that there was name dropping in youtube videos and that Chris said they had a girlfriend/boyfriend relationship. She didn't want him to know any of her information so she was going to have him talk through her friend who didn't care/know who he was. The 2 voicemails were actually not that "scary". I don't have the audio but I have the scripts she used and there was really nothing mentioned except that "she" was angry for him name dropping and the whole "ex" thing and that Tito wasn't the one to eff everything up, he did that all by himself. (EDIT: The only "scary" thing that I've learned that could have been said was that telling someone on youtube that you'll do something to them if they don't give you money is illegal and that he could get in trouble for it. It was only slightly mentioned in the 2nd voicemail...really slightly.) Here are the messages: (BTW: There's actually a few more that were sent before he responded, but they were through "Jenny"- (Censored)'s friend who was watching out for her. They basically said the same thing as these, just from a Friend's perspective.

8/07/11 Chris, it's (Censored). You need to reply to this because I am SO so so so angry with you and you won't answer your phone calls or voicemails. WE were never anything towards each other, and you calling me your ex and saying my name really piss me off. No apology is going to fix this. This is my friend's youtube page, I'm hesitant to give you ANY of my new information, so if you reply to this, Jenn (Jenny) is going to talk with you to see if you deserve my email or my new phone number. You will definitely not be getting my new address though (I've moved), so don't ask.‬

I have received your voicemails; I rarely check my voicemails, because most of my incoming calls are from Trolls, or otherwise people who look to mock me, including "789chan". I have created a video retracting the statement in question, and I will upload it later today. I used the term loosely as in you are a girl, and you were a friend. I fully understand that we were only friends, even though the feelings were Not mutual between us.

For your information, I currently have a woman Sweetheart, who gives me much appreciated respect, and the deep, sweet, romantic emotions between her and me Are Mutual and Truest. So, I do not require your contact information at all. AND She hugs and kisses me back. Unlike you, I feel that you were, and still are, an introverted, dismally depth, unable to give an emotionally truest damn about anyone who offers you care and/or affection, And your phrasings and voice tone are like that from the netherword; TOTALLY SPOOKY! To put it simply, you are easily comparable to Daria Morgandorfer, but WITHOUT the emotional maturing she was able to acquire later in her series. I would not go out with you even if I did not already have a Sweetest Girlfriend Sweetheart, and even if you did a complete emotional 180, becoming more like Stacy from the Fashion Club.

After all that has happened, the feelings between you and I are FINALLY Mutual; we are old, elder spirits who feel little but spite for each other.

I will admit that while we WERE friends, it WAS nice. But THIS is NOW.

This should be added into the Wallflowers article. If these are real (which I believe they are), it sheds a lot of light on Chris' feelings on the wallflower after the fall. And to think all this was lying around the CWCki for almost a decade.