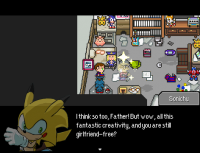 I became interested in Christian/Christine Weston Chandler and Sonichu, after watching a Down the Rabbit Hole episode about it in 2017 (I think).

Things that amazes me

It seems that the events surrounding Chris and Sonichu and show that no matter how much of a failure one thinks they are, it is nothing in comparison to the actions of Chris and Sonichu. I mean, who else thinks saving money is not important, while also thinking that the lottery is an investment strategy at the same time?

By the way, I do not think garnishment will make a big impact on the Chandlers’. I think an involuntary bankruptcy petition is when things will get very worrying, because if Chris ends up on the streets, the CWCki is going to lose their steady supply of new activity that attracts new fans like me.

I am not on any social networks.