This user is shit at tags. This is here in anticipation of being called out for my general tag-shitness.

Death of the strikethrough

Good job, squirtle. Strikeouts are just as st00pid here as they are on, say, ED. They should be eliminated on sight be replaced with something funnier. Apostrophe 19:53, 17 March 2010 (UTC)

Yeah, it's very EDish really, and something that gets to me a bit, as it was a really frequent pipe. It's been covered elsewhere, and we all know that Chris lies out of his arse. If it could be cleverly rewritten, then yeah, cool. But I don't think it will be. --YawningSquirtleRedux 00:29, 21 March 2010 (UTC)

Meh. Lie and Fail were the only two I was really after since it seemed like every article had over 9000 links to at least one of the two. Then I saw that the lie and fail pages were full of fail themselves, so I figured, why not get to the root of the problem? Apostrophe 00:56, 21 March 2010 (UTC)

A redirect seems like it wouldn't particularly discourage the addition of unnecessary pipe-age. Apostrophe 01:25, 21 March 2010 (UTC)

Quality Control. They have article deletion powers, and do things like making sure all the writing is of a good standard. Sound like your cup of tea to me --YawningSquirtleRedux 21:09, 21 March 2010 (UTC)

Where's the original of this duplicated file? I'm finding redlinked versions of it in several places (including Barbara Chandler, which is currently locked) and the template {{oversized}} (Usage). Please to be fixing. Apostrophe 22:28, 21 March 2010 (UTC)

Err, it might have got deleted in error- I was trying to fix the things coming in from CWCipedia while drunk. Try looking in the deletion log. --YawningSquirtleRedux 03:10, 22 March 2010 (UTC)

Thought for the Day

9 .) After this manner therefore pray ye: Our Squirtle which art in heaven, Hallowed be thy name.

11.) Give us this day our twice-daily Asperchu comics.

12.) And forgive us our debts, as we forgive our debtors.

13.) And lead us not into temptation, but deliver us from evil: For thine is the kingdom, and the power, and the glory, for ever. Amen.

Oh hai! Please remember to substitute the {{welcome}} (Usage) template when you use it. It helps users to see awesome Wiki markup, while also preventing a bunch of talk pages being edited if we decide to modify the template. You also no longer need to add your name to the template, but you should still sign it with --~~~~. Other than that, great job :D --Anonymax 21:11, 14 May 2010 (UTC)

I don't know if you've seen or if this counts as vandalism, but there has been some harrasing goind on. while what 16bitalex did was stupid, Delabonte and co. now are abusing their power by harrasing him. Also a new user Sully only joined for the sake of calling 16bitalex a fag and kiss delabonte's ass. here's a proof of what i mean: 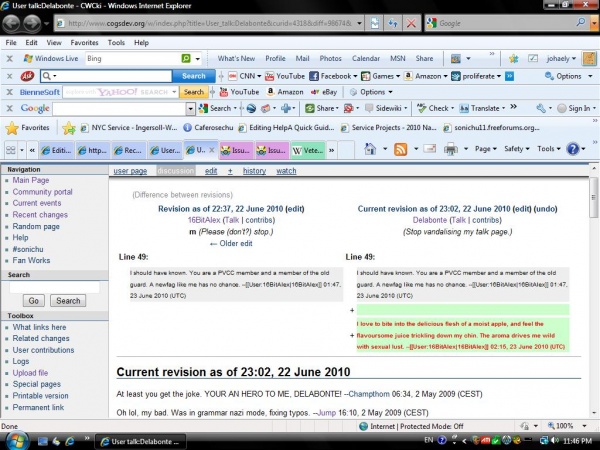 Sorry for bothering you with this crap, but its getting annoying and retarded. thanks and sorry once again.J0haely 14:23, 24 June 2010 (UTC)

Niggastolemyfamicom evaded his ban. He's IBAgeneva now and he's targeting my page, doing the same retarded shit he was doing back in April. I'm taking a "don't feed the trolls" stance and leaving it in the hands of you guys.