How to Talk to Girls 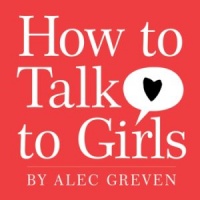 How to Talk to Girls is a 2008 children's self-help book written by Alec Greven, who at the time of print was nine years old and has created an entire series of similar books. Chris purchased the book in early 2009 under the guidance of his pastoral counselor and the John Tesh Radio Show, and in Chris's words is a "great book". The book itself is a guide on how to gain a boyfriend-free girl. It is not a good book for adults to take advice from, seeing as how each page is two or three short sentences long, and it's aimed at children around Alec's age. However, given that Chris is probably around Alec's age mentally, it seems only appropriate.

The advice given is quite simple: "The first thing you should say to a girl is hi" or "Don't act desperate, girls hate desperate boys". Despite the simplicity, Chris believes that the book will help him get a girlfriend, regardless of the fact that keeping an older girlfriend is a lot harder to do than a nine-year-old one. What's more, most of Alec's points are null when it comes to older women, especially ones around Chris's age who won't be swooned by a simple "hi" or "I like to draw, how 'bout you?". However, this does help to explain why Chris thinks that discussing one's favorite color is a romantic conversation.

In Sonichu #9, several concepts from the book are used in the dating education class.

Chris's views on magnets and metal

Despite the fact that Chris has never had a girlfriend, he still disagrees with Alec about how men are the "magnets" and women are the "metals", insisting that it could go the other way around; that is, women can attract men, while men may play a passive role in courting. While he's not necessarily incorrect, this statement shows how poor Chris's grasp on traditional gender roles in modern Western society are, even when compared to a nine-year-old boy.