Welcome to CWCki! There's a lot to do around here because Chris never does anything himself. I hope you'll stay with us and make many improvements of your own!

Before you start, be sure to read A Quick Guide to CWCki. This will guide you through the dos and don'ts of editing the world's most accurate wiki. Be especially sure to read this if you consider Anonymous to be legion or if you've just come over from ED. Everything you know is wrong.

Recent changes is a great first stop, because you can see what other people are editing right this minute, and where you can help.

If you haven't already, create a user page about yourself! If you do, we'll be able to know you better as a member of our community. Just be sure to check out the guidelines first.

Questions? Please read the FAQ first. Later, you can ask in the Community Portal or on the "discussion" page associated with each article, join the live chat in our IRC channel or post a message on my talk page!

Once again, welcome to CWCki!

I think in general, things should be linked at least once per section (on first mention), even if it's multiple times in an article. I use to subscribe to the school of thought that once per article would suffice but I think in a case where a subsection of an article was linked directly, the user shouldn't be made to scroll up to find an article on a topic if it'll clarify something. --Champthom 21:05, 3 December 2009 (CET)

Why did you delete the line, "Chris misses the irony that ass meat is exactly what he eats every time he drives to McDonalds."?

You said "let's not compromise the facts here", but isn't it well known that round steaks are popularly used as hamburger meat? McDonald's beef contains a variety of things and I imagine that round steak is one of the less nasty parts of the equation. --Doomknight 02:12, 6 December 2009 (CET)

http://upload.wikimedia.org/wikipedia/commons/thumb/a/a3/BeefCutChuck.svg/511px-BeefCutChuck.svg.png How is the part labeled "Round" (or at least the part of the round closest to the tail) not the ass? I am genuinely curious. --Doomknight 03:03, 6 December 2009 (CET)

Red links aren't exactly a bad thing, FYI. If there's a red link, make it a blue link by making it into something if it's notable enough to be its own article. Or, if it's a category, see if there's an existing category. You categorized a BlueSpike chat under Category:BlueSpike which seems to be restricted to fan art of BlueSpike, while you could have placed it in Category:PSN Chats. However, to be fair, PSN chats should be a subcategory of BlueSpike because, at least at the moment, all of the PSN chats are with BlueSpike. Anyways, back to red links, there's some option where if you don't like seeing red links, it'll just show a little question mark of the end of the word. Yeah.--Champthom 19:09, 11 December 2009 (CET)

Well, boss, I'm ready to round up all the bad articles from the ghettos and put them to work in grammaticalization camps. Where do you want me to start? Give me an assignment! I'm ready for it. I'm ready, boss. Put me in! --Tristran 23:45, 11 December 2009 (CET)

Ugh... a matter of confusion, master. We have Sonichu and Rosechu... and then we have the species of each. Are they be written "Sonichu"/"Rosechu", or are they "sonichu/rosechu" (and similarly with Sonees/sonees and Roseys/roseys)? There seems to be two different forms floating around; there's one that's capitalized and another that isn't. --Tristran 05:25, 13 December 2009 (CET)

Death of the strikethrough

Are we commiting genocide against the strikethrough? If yes, I'll join you, Liquid Chris for one, has not been purged. --YawningSquirtleRedux 16:37, 17 March 2010 (UTC)

Good work on Mumble 2 there Apostrophe! Article is looking much better. Was it you who wikified the summary as well? --YawningSquirtleRedux 16:49, 24 March 2010 (UTC)

It's been a while

Your dedication to the elimination of poor grammar, red links, and strikethroughs is inspiring. Keep it up! --Jump 15:42, 7 July 2010 (UTC)

What would you say is a better way to add emphasis? Capitals are used quite often, as in the "Description" section on ClydeGoingOnGregg1, but I'd tend to rather italicise. What is more appropriate? Sussuro 10:42, 10 July 2010 (UTC)

That you removed all criticism of chris watching a show aimed at small girls on the MLP page and then added "the only kiddy cartoon that most adults can watch without being derided." which is fucking hilarious...

unless of course you actually meant it... 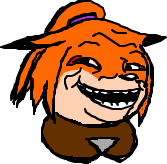 do you leik ponies Asstrophe?

Well it tells you where it links you when you scroll over it, so whats the problem?
None the less I removed those horrible, unholy, sinkholes from the MLP page properly, with criticism intact.
So... whats your favorite pony again? -HitIar "wunderbar!" 03:22, 2 September 2011 (PDT)

Why did you delete the article "Ruckersville Fire Department"? It wasn't a stub, there are plenty of articles of similar length on here, and I thought "no shit was too minor". --Skyraider91 00:51, 21 January 2014 (PST)

The destruction of Chris' house was (as of Jan 2014) the most significant event in Christory in some time. I only wished to thoroughly document every aspect of this event, and contribute. I apologize if the article I created was not of the highest quality, but most articles start out from humble beginnings and evolve over time, both in quantity and quality of content. The involvement of the Ruckersville Fire Department is central in the destruction of Chris' house, and prominent in the ensuing email leak, which itself was substantial. Therefore, I thought it more than sufficient to warrant its own page. However, as Alan Pardew suggested, the content might be better placed elsewhere, perhaps in a section of the "Destruction of Chris' House" article. Either way, I will defer to the judgment of the senior members of this community. I apologize for this short novel. I only wished to give my own viewpoint.

I see you want to improve the article Chris and nostalgia, if possible. To be honest, I really wanted to improve that project long ago, but I never got around to it, because to be perfectly honest, I'm a noob when it comes to writing articles. For that particular article, I was thinking about writing about how Chris seems to use nostalgia as some sort of comfort zone. Do you have any other suggestions? I do think this article really does have a lot of potential, given how big nostalgia is to Chris' life. --PsychoNerd054 11:25, 16 November 2017 (PST)