Difference between revisions of "Talk:Calling Out"

At the moment there is a problem with the video (probably Chris being a dumbass). It's viewable on his YouTube channel page, and I'm about to upload a backup until we can get it on the CWCVilleLibrary. --Anonymax 12:54, 6 August 2011 (PDT)

We won't know the true authenticity of the photos until Chris surrenders them. Until such a time, please refrain from theories as to who might be depicted in the photos. --Anonymax 16:34, 6 August 2011 (PDT)

I cannot believe that stalking him actually lured him out of his "retirement."

I find it funny how his self-introduction is still word for word from one of his earliest videos to the fandom- shows how little he's changed. Signfiicant enough to add to the video's description? --Xavier orona 01:46, 9 August 2011 (PDT)

Chris mentions being on a billboard in New York. Do we have any pictures of that? Do we have any information at all about the previous events to lead up to this?? And is the Heather he spoke of "Wallflower". If so, I think it's note-worthy that we mention that he still says they were dating at one point when she has said before (multiple times) that they weren't. If it isn't Wallflower...we need to find out who the heck she is. --4Macie 22:15, 6 August 2011 (PDT)

To answer your questions, Vans shoes had some promotion at the end of 2009 where people could submit photos that would go up on a billboard in Times Square. There were over 4 submitted of Chris by various trolls. The pics are probably somewhere, but I can't find them... Also, for the record, the Wallflower has a standing agreement with the CWCki not to be publicly identified. she shall be referred to only as the Wallflower, as we are true and honest, unlike Chris. --SargentPickles 22:45, 6 August 2011 (PDT)

After seeing him demand money, I just had to respond to him directly. I sent him the following PM.

On the threshold of legal trouble.
>"But anyway, moving on with my demands, I would like- also like you to set to-send me via U.S. Mail, ONE THOUSAND DOLLARS CASH. American. Unmarked billssss,"

You do realize that Extortion is a crime. Doing so through the United States Postal Service crossing state lines makes it a federally prosecutable offense. You'd be wise to remove your "Calling Out" videos before they get mirrored and used against you in a court of law.

I'm pretty sure that Thorg is actually User:Thorgnzorrg. Can we mention it, for the sake of being good, clear and trustworthy source of informations of Chris' lifetime? Hasharin 13:31, 8 August 2011 (PDT)

Amazingly, he seems to be correct about the owner of the Game Place. I was expecting that Chris was likely to have fucked up and mixed him up with someone of a similar name and more or less committed slander in front of the world, but: http://sex-offender.vsp.virginia.gov/sor/offenderDetails.html?regId=13957 and here's the information for the Game Place LLC in Virginia: 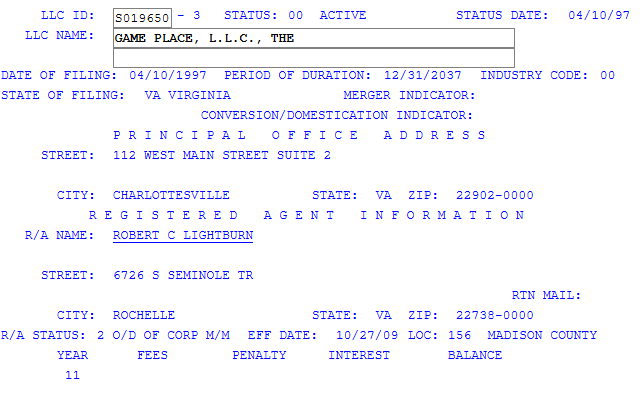 There supposedly a response (well...a few actually) from Tito. The one I'm actually interested in (because the others really suck and pretty much scream fake) can be found here [1]. Do we have any way to confirm or deny ANY of these supposed responses? --4Macie 21:29, 9 August 2011 (PDT)

On the subject of the response video, should it be placed on this page? Certainly it seems like that would be beneficial in making the events covered by the article easier to follow for future readers. On the other hand, I feel a little apprehensive about putting a non-Chris video in the middle of this article. Perhaps the video could have its own separate page? Granted, I feel even more apprehension towards that idea, as I don't think we should get into the habit of making pages for videos other than Chris's. Of course, it's already posted on Surfshack Tito (troll), but if events led him to make several more videos then that page will quickly turn into a mess. Plus, in the future it might be difficult for readers to discern were in the timeline Tito's response video fits. --ThatMan 20:41, 10 August 2011 (PDT)

The photograph of Thorg is quite recognisable as being half of the face of Thunderf00t, a prominent figure on youtube who gained fame for his radical defense of-wait for it- atheism; making whole video series debunking creationist claims and even debating Richard Dawkins. Moreover, Thunderf00t DOES have a lot of acne scars. I don't know how it could have happened, but it seems clear to me that Chris has managed to confuse Thorg with a minor internet celebrity. Qeex

Chris doesn't really reference his father in any of these videos; despite having mentioned the family several times. When previous talking about his family, Chris almost always referred to Barb and Bob individually as "my mother and my father" (or some facsimile thereof). Could this possibly indicate Bob's demise? And in any case, would this note be worth adding anywhere? --IwegalBadnik 11:20, 11 August 2011 (PDT)

Well, the thing is is that Chris isn't too fond of his father and he's shown that in the past. More than likely, he's either ignoring him or he's forgetting him. And as bad as his train of thought it, I'd go more with the latter.--Blazer 12:21, 11 August 2011 (PDT)

Given the fact that Bob recently pulled the "Fag" card on Chris over his Tomgirl adventures, I will grant you that Bob probably isn't too popular with Chris. However, given that it is also known that Bob has malignant cancer, Chris may be being more than just forgetful or ignorant. --IwegalBadnik 12:55, 11 August 2011 (PDT)

Seriously? Does there need to be that many fucking links to retarded shit in the transcripts?? You people act like just because Chris finally made a new video you have to pipe EVERY SINGLE word that can be relayed to a different page.. Its fucking ridiculous... Smtp 12:18, 11 August 2011 (PDT)