Difference between revisions of "Talk:Liquid Chris"

This is just personal opinion and it's obviously going to be hard to entirely wind the gears backwards with this joke, but I think that a good way to reuse this joke when it inevitably runs its course would be to act like Chris-chan has died and that the mimic is merely assuming his place to fill the gap he would leave in all our hearts, and taking over the reigns on Sonichu in his honor. I can only imagine how Chris-chan would react to that. Evang7 03:44, 30 July 2009 (CEST)

Suggestion for the lulz: Both CWC's are TRUE and HONEST, except CChanSonichuCWC is from an alternate dimension where his parents died early, and he ended up adopted by a family that taught him about social interaction, basic hygiene, and got him professional help for his autism; so he ended up becoming eccentric-but-lovable.

Or else they're both clones from the Les Enfants Autistcs program and Chris-chan just got the short end of the gene stick (will Chris start aging early? Will CChanSonichuCWC get his arm cut off and then grafted onto Clyde Cash and take over Clyde's mind?). Needlepants 23:18, 4 August 2009 (CEST)

When is it appropriate to label CChanSonichuCWC as "Liquid" Chris? Decoy Octillery 06:20, 5 August 2009 (CEST)

Chris's hissy-fit on this issue is made all the worse by his insistence that someone wearing similar clothing and mimicking your speech impediment counts as "identity theft." I don't know much on the subject, but maybe this sign of Chris's irrational jealousy could be incorporated somehow?CDiddles 18:34, 6 August 2009 (CEST)

While this is normally a site dedicated to the antics of Ian Brandon Anderson (erronously CWC), I think it might be useful have separate pages for CChanSonichuCWC's videos from the CWCivil War (the early videos we can just briefly mention or link to, that is pre-Ian). However, I'd like some feedback first before starting anything. Any thoughts? I suggest this since Liquid is to the best of my knowledge the first troll who has released a series of videos to which Chris has responded to (as opposed to just IMing Chris or making videos that, while my notable individuals, are not addressed by Chris or making videos that are popular involving Chris but Chris is not aware of).

Also, since I have a feeling Liquid might be deleting his videos as he's going to Redmond, I'll have to ask the TheCWCvilleLibrary Archivist if she can archive Liquid's videos for posterity. --Champthom 19:09, 16 August 2009 (CEST)

We should convince Chris-chan that CChanSonichuCWC was mistaking him for a different person who really WAS named Ian Brandon Anderson all along, and that the TRUE and REAL Ian has indeed kidnapped him. If anything I'd love to see how Chris would react to that, if at all. Evang7 02:28, 17 August 2009 (CEST)

With everything that happened in the second half of the Liquid Saga, this page could really use a rewrite.

Maybe a name change as well. "Liquid Chris" flows off the tounge much better than "CChanSonichuCWC". I mean, Vivian Gee isn't known by her YouTube screen name. --Beat 01:49, 18 November 2009 (CET)

This article kind of sucks

I just noticed that this article doesn't really explain who exactly Liquid Chris is, how he trolled Chris, the SingStar Challenge, etc. in any but the most general terms. Most of the length of the article is devoted to "theories" and a chatlog. I wasn't into the trolling scene at the time, and have no knowledge of the source material, so while the motto of a wiki is "so improve it, dumbass," I think I'm unqualified for the task. --Sonichuis44 03:17, 5 January 2010 (UTC)

New subheadings are in place for the basic parts of the Liquid Saga. Please help flesh them out with details, pictures, citations, quotes, etc. The Kacey article needs to be reorganized, too, because that part of the saga is big enough to warrant a separate page. --Dude 06:11, 18 January 2010 (UTC)

Why was "Theory" moved into the fan namespace?

One of the big criticisms of this article was how much filler it had vs. categorized info about Liquid and the events around him. As we flesh out the story, that first bullet will be explained elsewhere. The rest of the "Theories" might otherwise just get deleted, and I thought they were fun enough to keep around. Thoughts? --Dude 01:59, 19 January 2010 (UTC)

So is this true? He has cancer?

Or am I being a total new fag?

Check the elbows at 4:03. His left arm is significantly shorter than his right. You can see it in other shots but it's most obvious there. I asked a med school friend, she said that they probably dealt with his cancer by removing a chunk of bone and pinning his arm back together.--Beat 02:59, 17 June 2010 (UTC)

Truly he is the anti-chris. Funny, intelligent, talented, and he doesn't let a potentially crippling medical problem get in his way. Bill Lumburg 03:36, 17 June 2010 (UTC)

Does this image go in the article? 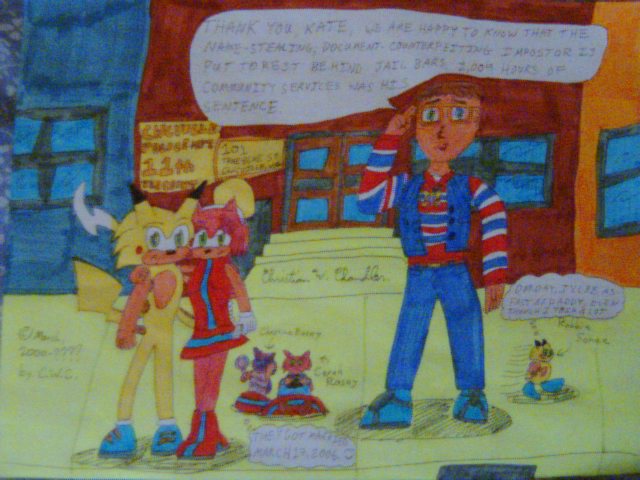 "Name-stealing" AND "Document-counterfeiting"?! Yeah, we know he'd been a tard on this issue, but this time he tries to retcon reality to show that Liquid was "put to rest behind jail bars". (And 2000 hours community service on top of that.) Unless this image never referred to Liquid after all... --SeventhBase 15:38, 26 September 2010 (PDT)

Since Liquid Chris seems to no longer be part of the trolling, no one even pretends to pretend he's the real Chris, and Ian Brandon Anderson got edited because the meme was considered stale, shouldn't this be redone to show explicitly how Liquid Chris trolled CWC?Or is it a RyanClash thing where its just considered 'better' to have it be in-troll? Pretty spergy of me, I know, but just something that's been nawwing at me for a while.--Scherzo 17:24, 12 August 2011 (PDT)