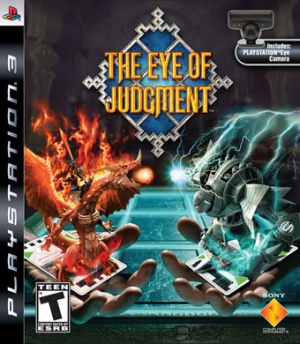 The Eye of Judgment is a turn-based card battle video game developed by Sony for the PS3, and the only reason Chris apologized to The GAMe PLACe. It uses the PSEye peripheral for special gameplay elements and detection abilities.

In his March 18th 2009 video, Chris mentioned he would play in the game's Dioskuri Tournament, with the hopes of attaining a spot in the top 100 in order to win 3 promo cards. Considering he was still banned from The GAMe PLACe (which he said was the only place he could buy cards from), it is very likely that he only had the cards that the game came with, thus limiting his performance. It can be assumed from past competitions that Chris expected to win the competition, although it is unknown if Chris ever won the competition, won the cards, or even participated, as he never brought up the tournament again.

Given that the cards work by being scanned by the PSEye, it's unknown how he expected them to work. He may have printed new names and descriptions over patterns for existing cards, as he did with Animal Crossing cards, and pretended that they worked. However, there's actually a chance that the cards could actually work; it has been reported that, due to the shit-tastic image recognition technology the game uses, printer copies and even hand-drawn copies of existing cards work.[1]

It is still possible to play the game IRL without the use of the PlayStation 3, since online services for the game were discontinued in September 2010, but even in that case his cards (like all his custom abominations) are horribly unbalanced and several shades of retarded.